There have been rumours about Office for iPad for a couple of years now — indeed, a Microsoft executive can rarely appear in public these days without getting asked about it.

Although Microsoft CEO Steve Ballmer recently seemed to quash speculation about it once more , the rumour keeps on springing up. That's because Microsoft's decisions about Office for iPad send a signal about its broader strategy.

Investment bank Morgan Stanley recently weighed in, suggesting Microsoft could make billions from an iOS version of Office. A research note from the bank's Adam Holt said that although Microsoft has held back from offering Office on the iPad, it may do so if Windows 8 tablets fall short of expectations. 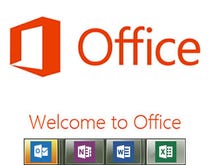 After a week of using Office 2013 we're pleasantly surprised. The changes Microsoft has made to support Windows 8 — and specifically Windows 8 tablets — are logical, and they work well with more traditional ways of using Office.

Selling Office with all-new iPads across 2014 could raise $1.3 billion, the bank calculated; selling Office (at $60) to a third of the iPad install base could also raise $2.5 billion, with Android sales on top.

That would make more money than Microsoft could generate from an 11-percent market share in tablets. "Office exclusivity on Win tablets important, but the iPad opp. may be larger," said the note; "the math is compelling and may drive MSFT to move Office."

Sell Office or prop up Windows?

Silver added: "Propping up Windows is a bit of a dangerous proposition because organisations are using more and more non-Windows applications and Windows is getting somewhat weaker. It's back to the innovator's dilemma — that if they don't [deliver Office for iPad] someone else will, and they could end up losing both franchises."

But if Microsoft doesn't act soon, there are plenty of other office suites out there that could start picking up users, he warned: "The danger is that people will see a $20 or $30 product, get used to it, and decide that it's good enough."

"Microsoft's problem over the last decade has been the inability to create cash cows other than Windows and Office" — Michael Silver, Gartner

Pricing is another tricky balancing act, according to Silver: "If and when they do come out with it, they will need to decide how to price it. If the product does too much of what Office does and they price it too low, then that's going to cannibalise the traditional desktop Office product."

"They need to figure out the tipping point where the benefit outweighs the danger. If you look at Office as well as Windows, it's becoming relatively less important than it used to be because people are doing things with other applications and other devices."

Silver points out that the Office division makes more money than the Windows division — and that's part of a broader problem. As Bill Gates himself has acknowledged, Microsoft has been slow to move beyond the desktop and into mobile, for example.

"Microsoft's problem over the last decade has been the inability to create cash cows other than Windows and Office — other products that are as big and lucrative," said Silver.

Microsoft Surface , Windows Phone and Windows 8 are all about Microsoft's attempt to reinvent itself for a world of tablets, smartphones and cloud computing .

But it's been a conservative, defensive reinvention — on Microsoft's terms — that still assumes Windows is the centre of the universe, and still the default platform for enterprise and consumers.

Although it's still early days, things don't seem to be working out particularly well so far, with lukewarm reviews for Surface and consternation about the changes to the Windows user interface.

Microsoft is clearly watching the non-Windows tablet space with interest: Lync and OneNote already exist for the iPad, and there's a long-standing Mac OS version of Office.

A matter of timing

The timing of an iPad version of Office will indicate how well Microsoft's new strategy is playing out.

If Microsoft feels it has stopped the erosion of its position with Windows 8 and its mobile and tablet initiatives, then there's less need for an iPad version of Office — apart from the cash.

By offering Office on the iPad, Microsoft would be effectively acknowledging that Apple had won: it would be an admission that Windows 8 tablets — including its own Surface Pro — had failed to grab market share.

In turn, this would signify that the tenure of Windows as the default platform for enterprise customers and consumers is over. And that's why Microsoft is thinking so long and hard about it.

Join Discussion for: Office on the iPad: It's not about the money,...