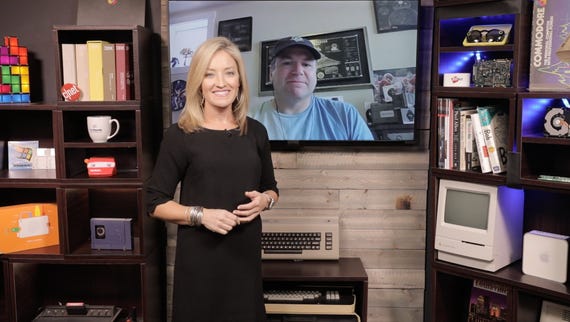 When the new Fitbit Versa 2 arrived for testing, I committed to keep wearing it for at least a month to see if it was the right wearable for my needs. It served as a solid wearable for sleep tracking and improving my sleep score, but it's not the watch for me.

Also: Fitbit Versa 2 review: Buy it for its outstanding sleep and health tracking, not for its limited smartwatch functionality

The Fitbit Versa 2 is a very comfortable watch that I wore 24/7 and only took it off every four days to charge it up. I usually charged it when I was sitting at my desk writing articles and could count on it charging back up to full within about an hour.

The small form factor, lightweight, and excellent watch band options make it a watch you don't want to take off. I never once had an issue with the design or form factor of the watch, including sleeping with it every night since it arrived.

A couple of times at night, I noticed the watch face shining bright since I forgot to switch it to night mode. ZDNet's Ed Bott pointed out to me that you can set a schedule for sleep mode. Go to Settings > Sleep Mode > Schedule > Customize and you will never have to worry about bright lights at night again.

While I like the ability to have an always-on watch face, battery life gets cut nearly in half so I kept it toggled off for much of the time. I would turn it on every couple of days because I found that the watch face wouldn't turn on as easily as I wanted with a flip of the wrist. It takes a bit of routine to get it down consistently.

The most useful functionality I found with the Fitbit Versa 2 was the sleep tracking. It rarely let me down and the good thing about Fitbit is that you can go in and edit your sleep time after you wake up. Twice over the past month, the sleep tracking did not start when I went to sleep so I simply adjusted the start time to recover some stats for those evenings.

During the first week of use, my average sleep score was about 73 and now I am seeing scores from 78 to 82 as I use some of the premium service programs and stop working at night to get more sleep time. Sleep is critical for long-term health and it's justifiable to have a device like the Versa 2 around just to help you in this area.

CNET: Fitbit Versa 2 review: A $200 smartwatch and fitness tracker with a battery that won't quit

Exercise tracking was one area of the Fitbit Versa 2 I used the least amount since I like to have GPS onboard my watch for tracking my runs and biking. The Versa 2 does not have GPS and relies on the connection to your phone for tracking your exercise with GPS. A couple of times, the Versa 2 did not connect properly to my phone and thus I ended up with results that showed distances that were not as accurate as my other GPS watches.

The workouts provided in the Fitbit ecosystem are indeed helpful and with several business trips over the past month, it was great to have the Fitbit Versa 2 helping me workout in hotels. I need to spend more time with workouts, programs, and challenges as I think these areas are very useful on the Fitbit Versa 2.

Using the Fitbit Versa 2 daily made it clear I rarely used any of the apps I installed on the watch. I only used Exercise, Sunup/Sunset, Weather, and Today. I tried more than 30 apps but never used them after some initial testing.

I would often view the smartphone notifications received on the Versa 2, but the small display and limited app support kept me from doing much more than viewing the time and tracking sleep and exercise data.

There are currently nine guided programs in Fitbit Premium and I've now tried out five of them. They provide some useful information, reminders for helping you improve, and have the potential to be very useful if you open the Fitbit app and follow through on the tasks.

I never used any challenges or adventures and never once looked at the friends' leaderboard in the app. Fitbit has a large community and many find it motivating to have others help them achieve their goals. I was so busy over the past month that I never found checking this something of value.

The Fitbit Versa 2 is the best Fitbit currently available and if you are a part of the Fitbit community I heartily recommend it as the watch for Fitbit fans. The form factor and design make it an extremely comfortable wearable that is easy to mount on your wrist 24/7.

The battery life is decent and you can trust you will get through a weekend without charging as you get out and about. The vibrant OLED screen looks great and I'm a fan of the single button design.

Sleep tracking has been reliable and is very useful for improving a key element of long-term health. There are many functions for managing your health in the Fitbit ecosystem and I still have only used a fracture of what is available.

I paid for the yearly subscription to Fitbit Premium and after a month I think $80/year is a great value for the service provided. I really want to see the smart alarm feature rollout as I think that will help the sleeping capability of the watch.

The Fitbit Versa is not that useful for those who like to track their exercise with GPS and using the Versa 2 makes me want to see a next-generation Ionic with GPS and onboard Spotify support. Maybe that's something we will see in the future.

Join Discussion for: One month with the Fitbit Versa 2: Comfortable,...