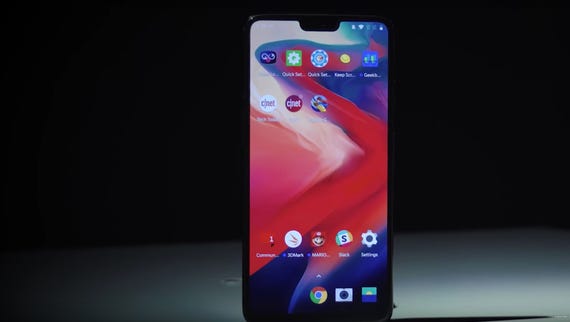 CNET reported this morning that the OnePlus 6T will launch with T-Mobile in October, its first US carrier partner.

OnePlus has been making solid Android smartphones, offering near-flagship specifications at hundreds less than Apple, Samsung, LG, HTC, and others. The OnePlus 6 -- see our full review -- is an outstanding smartphone that starts at just $529. The OnePlus 6T will likely include a few minor improvements and be priced in the $550 range. That's about half of the cost of the new Samsung Galaxy Note 9.

OnePlus started out as a value flagship company, but has been increasing its prices and the capabilities of each successive phone. When you consider that Samsung and Apple flagships are $1,000+, then the OnePlus line can still be consider a value brand with the highest price option (8GB RAM and 256GB internal storage) is still just $629. The OnePlus phones get updates quickly, have some unique capabilities (three-way ringer switch), and have an energetic support community.

Partnering with a US carrier is a great move that should raise awareness of OnePlus in the US. When I show people the OnePlus 6, I am constantly asked about the company and have yet to meet a single family, friend, or acquaintance who has heard of it. T-Mobile is an excellent choice of a carrier, too, since it doesn't load up tons of bloatware on phones, and the OnePlus 6T even supports the 600MHz band 71 extended range LTE, so it is a phone of the future available now.

I bought a Silk White OnePlus 6 a couple of months ago, and I think it may be the most stunning smartphone design I have ever experienced.

T-Mobile offering a flagship phone like the OnePlus 6T at half the price of Apple and Samsung flagships is certain to be popular. People, especially military families, can save big on T-Mobile, and the OnePlus 6T will give them an affordable, gorgeous smartphone choice, too.

The OnePlus 6 camera was already impressive, but the company claims it can push it even further starting with OxygenOS 5.1.9.

New and upcoming phones: Google Pixel 3 and others we're expecting in 2018