Sandra is a freelance IT writer with extensive experience across both business and consumer audience. She is equally at home writing a smartphone review as a research report for an international telecoms company.

The OnePlus Nord CE 2 has an attractive price tag in the UK of £299, or €349 in Europe (the Nord CE -- Core Edition -- series is not officially available in the US). Although compromises must be made to achieve that level of affordability, there are some improvements over the original Nord CE 5G, which I reviewed last summer. These include storage expansion via MicroSD and 65W fast charging. 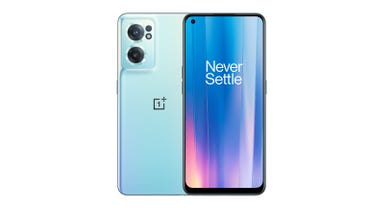 Given the budget price tag, it's no surprise that the Nord CE 2's backplate is made from plastic rather than glass or metal. The back is shiny and slippery, and failed to sit on the arm of my chair securely. It slid about as I would expect any smooth-backed handset to do – at least, until I attached the provided opaque white bumper.

The good news is that the back doesn't collect fingerprints to an undue degree, so you shouldn't need to constantly wipe it clean. My review sample was Bahama Blue -- think 'baby blue' and you'll have a good idea of what that looks like. There's also a Gray Mirror version.

The plastic picks up colours from its surroundings to some extent, reflecting whites, pinks and lavenders. One distinctive note is the translucent raised camera lozenge, although it's difficult to capture this in a photograph.

The handset's sides have a slight overbite in relation to the backplate, which is noticeable if the Nord CE 2 is set beside something that's constructed with greater precision. This is unlikely to affect usability, however, or put off potential buyers.

The plastic backplate helps to keep the OnePlus Nord CE 2's weight down to 173g. Its dimensions of 73.2mm wide by 160.6mm deep by 7.8mm thick are not unusual for a phone with a 6.43-inch screen, although the relatively large bottom screen bezel suggests OnePlus could have trimmed a few millimetres from the handset's depth. We calculated the Nord CE 2 5G's screen-to-body ratio to be 85%, compared to 85.4% for its predecessor.

As on the Nord CE, OnePlus's Alert Slider is absent from the CE 2. Located on the right side of higher-end OnePlus handsets, the Alert Slider lets you flick between silent, vibrate and ring modes. This is a distinctive feature that's much appreciated by OnePlus fans, and its absence – presumably on cost grounds – is a shame. There is a 3.5mm headset jack, and the SIM caddy has room for two SIMs and a MicroSD card for storage expansion.

The 6.43-inch AMOLED screen is bright and vibrant, with 1,080 by 2,400 resolution (20:9, 409ppi) and HDR 10+ support. The pinhole camera in the top left of the screen is not distracting. The 90Hz refresh rate was set as standard out of the box, although you can drop down to 60Hz to conserve battery power if necessary (my benchmarks were taken at 90Hz). The in-display fingerprint sensor worked fine for me, and Corning Gorilla Glass 5 provides some protection against knocks and scratches.

There are some tweaks that can be applied to the display, including opting for a light or dark theme and using Eye Comfort mode. However, the reading mode that turns everything monochrome, which I really like on higher-end OnePlus phones, is not here, which is a shame.

The speaker directs sound from the bottom edge of the handset. Audio is very loud, but not of great quality, with music harsh and distorted at higher volume, and bass is notably absent. I'd use it for spoken word audio, but wouldn't like to rely on it for any kind of music playback.

The OnePlus Nord CE 2 is powered by MediaTek's Dimensity 900 chipset, a departure from the Qualcomm Snapdragon 750G used in the Nord CE. It's a fair choice for a handset at this price point, and it performed well enough in everyday use, delivering Geekbench 5 scores of 719 (single core) and 2143 (multi core). Those scores put the Nord CE 2 close to the Honor 50 in performance terms (775 and 2885) respectively, although the Honor 50 has a 120Hz screen and some other interesting features, and is considerably more expensive (£529 at time of writing).

The Nord CE 2 has 8GB of RAM and 128GB of internal storage (105GB free out of the box), and the presence of a MicroSD card in addition to two SIM slots is welcome. The Core OS is Android 11, with OxygenOS 11 on top. It's nice to see that the app drawer contains very little OnePlus bloatware.

Considering this handset's price, it would be unrealistic to expect top-notch cameras.

There are three cameras at the back: 64MP f/1.79 wide angle, 8MP f/2.2 ultra-wide angle (119°), and a 2MP f/2.2 macro camera. Point-and-click shots from the two main cameras were OK, but not outstanding. The macro camera is disappointing, however: fixed focus limits its utility, and it doesn't go very close-in to the subject. If photography is a high priority, then you'll probably want to look elsewhere.

The Nord CE 2's 4,500mAh battery performed very well, keeping the handset going for 19 hours and 16 minutes while running the PCMark for Android Work 3.0 battery life test. And when I asked the fully charged phone to play YouTube video for three hours it dropped just 13% over the period. This extrapolates to around 23 hours of battery life.

OnePlus has implemented 65W SuperVOOC charging, which is a big plus point. I started charging the phone at 17% and after 15 minutes it had got to 74%. Things slow down as the battery fills up, and it needed a further 15 minutes to get to 98%. As you'd expect on a budget phone, there's no support for wireless charging.

Although the Nord CE 2 is a competent mid-range smartphone, there's plenty of competition in this price bracket. OnePlus fans might also want to consider the Nord 2, which, discounted at the time of writing, offers a higher specification for only a little more outlay.

The best place to sell or trade in your phone: Turn old tech into cash

The best cheap phones: Flagship features for under $450