I'm guilty of spending way too much time obsessing over the latest smartphone trends, looking for features that are going to shape and change the way many of us live in the near future.

The problem with this line of thinking is that there's an entire segment of users left out. Users who don't care about having the best technology, but simply want a phone that's going to give them a way to communicate with jobs, loved ones and friends for the next few years, without costing a fortune.

That's where Apple's iPhone SE comes in. Apple just announced the third-generation budget-friendly iPhone. The 2022 edition of the iPhone SE starts at $429 -- a $30 price increase from the previous generation. Preorders are currently open, with shipments and retail availability starting on Friday, March 18.

I've spent the last five days using the iPhone SE as my main phone, and besides having to adjust going from an iPhone 13 Pro Max and its massive (by comparison) 6.7-inch display, I've enjoyed going back to a smaller, more manageable iPhone. If you want the tl;dr version that won't spoil the review, then I'll just say this: The iPhone SE is a treat to use. 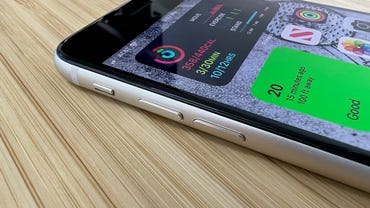 If you want all of the nitty-gritty details, well, then, keep on reading.

There are large bezels above and below the display, both of which serve as a reminder of how spoiled we've become by displays that span edge-to-edge in modern iPhone designs.

The "chin" below the display is Apple's iconic home button with Touch ID that's used to unlock the phone, approve Apple Pay purchases and sign into apps.

The "forehead" above the display is where the 7-megapixel FaceTime camera is housed, along with the earpiece. Surrounding the entire device are rounded edges, yet another contrast to the iPhone 13's square-edge design.

On the right side of the iPhone SE is the side button that's used to turn it on/off and wake or lock the phone. On the left edge is where the volume up and volume down buttons are located, along with the mute switch. On the bottom of the phone is a Lighting port for charging or syncing the phone.

The iPhone SE is available in three different colors. There's Midnight (black), Starlight (white) and Product(RED). I've been using the Starlight version, and really like it.

One aspect of the iPhone SE I wish Apple would have changed is by adding MagSafe to the back of the phone. MagSafe has morphed into a feature that's about more than a means to charge an iPhone. There are a large number of accessories that work with MagSafe like Apple's own MagSafe wallet, Moment's MagSafe phone mounts for photography or the countless cases that exist now for the iPhone 12 and iPhone 13.

I'm not a huge fan of using benchmarks to determine a device's overall performance, be it a computer, tablet or smartphone. However, I was curious how the iPhone SE's performance compared to the iPhone 13 Pro Max -- considering they have the same processor -- as well as the Pixel 6 Pro with the first-generation Google Tensor processor.

My personal experience confirms that the iPhone SE is just as fast as the iPhone 13 Pro Max (which is my main phone). It's not only noticeable in how fast apps open or when multitasking, but also while changing between camera modes, for example.

Another benefit of using the A15 Bionic in the iPhone SE is the addition of 5G connectivity. More specifically, you'll get Sub-6 5G, and not mmWave. I don't know what kind of impact 5G has on battery life for the iPhone SE because AT&T still hasn't launched 5G where I live. While the lack of mmWave may be a disappointment to some, I agree with ZDNet Staff Editor June Wan who wrote about the lack of mmWave on the iPhone SE not being a big deal. If the iPhone SE was double the cost, sure. But at $429, the lack of mmWave is a non-issue. For those who are unfamiliar, mmWave is the fastest flavor of 5G currently available, but the rollout has been slow and sporadic and requires you to be very close to a tower, and is often hampered by windows or even trees.

The lone 12-megapixel camera is no slouch. While Apple didn't upgrade the hardware itself, the camera benefits from the A15 Bionic processor and its image signal processor. The end result is a camera that takes clear and crisp photos without any tinkering with settings. Open the camera, take the picture and share.

I took a lot of pictures over the last few days and I can honestly say that I didn't take any where I felt like the camera experience wasn't on par with the iPhone 13 Pro Max, with the caveat that the Pro Max has three cameras to the iPhone SE's single lens. Instead of showing you pictures of random everyday objects or boring food photos, I'll share this one of my dogs.

The 7-megapixel FaceTime camera is also clear and sharp. I was impressed with how clear of a picture came across in FaceTime tests with my wife.

As far as battery life goes, Apple states that it added about two hours of use to the iPhone SE's battery when compared to the second-generation iPhone SE. That equates to 15 hours of video playback, compared to 13 hours of the previous model.

The best MagSafe battery packs Apple's MagSafe tech has been integrated into removable batteries. These are your top choices.

That said, I've been able to get over 3 hours of screen-on time during testing throughout a typical day before I had to reach for my charger. It's good enough for someone who doesn't live on their phone, constantly checking social media, messages or email. If you consider yourself a power user, you'll likely find the iPhone SE's battery life lacking.

The iPhone SE is, arguably, just as important as the iPhone 13 to Apple's smartphone portfolio. And the updates Apple made to the iPhone SE bring it current with modern tech in terms of performance and 5G connectivity thanks, in part, to the A15 Bionic. It's a phone that runs iOS 15 right now and will continue to receive iOS updates for the next several years.

Apple has fine-tuned the recipe that is the iPhone SE, improving upon a phone that was already a steal. Whether you're managing a fleet of workers who you need to equip with an iPhone, or you're simply someone who likes smaller iPhones, the iPhone SE is an easy choice. You simply can't find a better phone at this price.