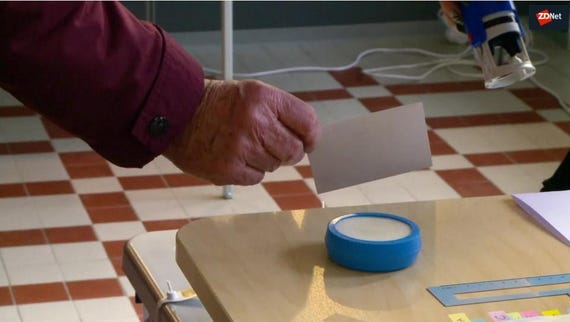 This month's Estonian parliamentary elections set a new digital record: almost half the counted votes were cast online — 247,232 out of 561,131.

In the tiny Baltic state, the overall winner of this year's election, the center-right Reform Party, also won the online election, receiving 40 percent of the e-votes. Second place was narrowly claimed by national conservative party EKRE with 13.5 percent, while another conservative party, Isamaa, came third with 12.5 percent.

Voting online, or i-voting, as it is often called in Estonia, takes place during the advance voting period that runs from the 10th until the fourth day before the election. It is not possible to i-vote on election day.

The voting process itself is fairly simple. The voter needs a computer with an internet connection and a national ID card or a mobile ID with valid certificates and PIN codes.

Once the voting application is downloaded, the software automatically checks if the voter is eligible to cast a ballot and displays the list of candidates according to the region where the voter is registered.

After voters make their decision, the application encrypts their vote and it is securely sent to the vote-collecting server. Every vote receives also a timestamp, so if necessary, it is possible to verify later whether the vote was forwarded to the collecting server.

As i-voting doesn't take place in a controlled environment like a polling station, the authorities have to ensure that the vote has been freely cast. So, voters can change their choice during the advance voting period digitally or at a polling station, and then the last vote given is the one that counts.

Also, from the 2015 parliamentary elections, i-voters can check whether their vote was received by the server, using a device that has to be equipped with a camera and an internet connection. The system has been designed to ensure that voters' computers are not infected by any kind of malware that could change or block their vote.

Electronic voting was introduced as far back as 2005 in Estonia for municipal elections. In its first use, altogether 9,287 votes, which was less than two percent of all counted votes, were made digitally. Back then, the only method to vote digitally was to use the compulsory chip-equipped Estonian ID card, which had been introduced three years earlier.

To use the Estonian ID card, a smart-card reader and special secure software are needed. The card holds two separate public key infrastructure, or PKI, digital certificates: one for confirming the holder's identity, and the other to let that individual sign documents with a digital signature.

That is the equivalent of signing a document in person, and it's considered just as legally binding in Estonia. For both actions, the ID-card holder has special PIN codes.

The 100,000 i-voters milestone was reached in the municipal elections in 2009 when about 16 percent of all votes were cast digitally.

In 2007 an alternative to the ID-card based system called Mobiil-ID was launched, which made the voters' lives even easier. Instead of carrying around a smart-card reader, citizens could securely vote using a mobile phone with special PIN codes.

This system is SIM-based, which means to get Mobiil-ID one has to apply for it from the mobile operator, which then provides a special SIM-card.

The first elections when Mobiil-ID was used parallel to ID-card and traditional ballot voting were the 2011 parliamentary elections, when altogether 140,846 votes were made digitally.

The previous record was set during the 2017 municipal elections when 185,871 people, which counts for 32 percent of all voters who participated, chose to i-vote. After this year's parliamentary election, the record is 44 percent.

The next election for Estonian voters, the European parliamentary election, is coming up in a few months. The country will learn whether it's reached the 50 percent milestone on May 26.

Government also offers cash rewards worth as much as $50,000.

South Korea's Ministry of Science and ICT will develop a blockchain voting system that will go on trial in the private sector in December.

Putting 2017's ID-card security crisis behind it, Estonia has come up with Smart-ID.

Estonia has just 1.3 million people, so why are its startups setting investment records?

Startups in small Baltic state Estonia have attracted over half a billion dollars in investments in just 1.5 years.

Blockchain could bring electronic voting to Australia by 2017 TechRepublic

The state is the first in the country to offer voting by smartphone app. Experts say there are plenty of reasons to go slow.