At the Oracle OpenWorld conference today, Oracle President Mark Hurd introduced an upgrade to the Exadata system that was announced at last year's conference.

The flood of data isn't offering any signs of letting up - and the demands that users place on the data is only getting stronger. In announcing the Exadata X2-8, Hurd said the company has beefed up the processor performance and upped the memory - a move that is all about "speed, the raw speed." It can handle one million I/Os per second, he said. 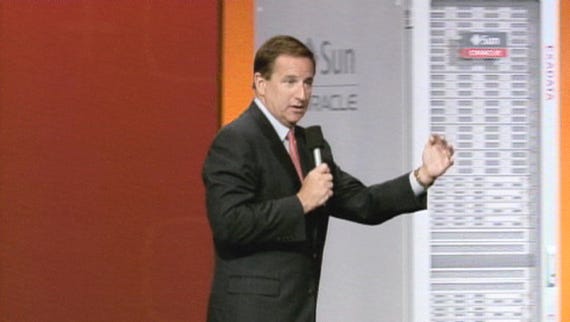 Security is also a big issue, he said, noting that the new Exadata has full database encryption. Users also get to choose between Linux or Solaris systems.

Calling it a complete ready-to-run system, Hurd said it also provides customers with one company to hold accountable. The product will be available in the next 30-45 days and that it is selling now.

The system announcement was preceded by a presentation by John Fowler, Executive VP of Hardware product development, who highlighted the technical specs behind Oracle's systems and how things like processing power, memory and speed are all being enhanced for future growth.