By Larry Dignan for Between the Lines | February 12, 2018 | Topic: Artificial Intelligence 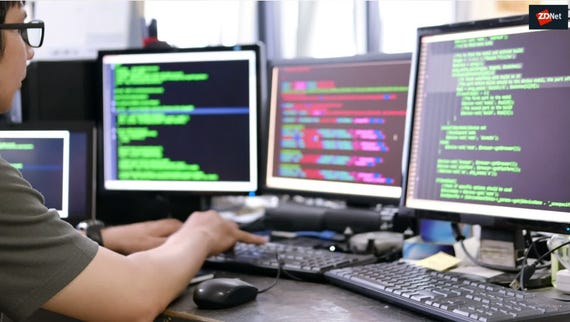 Enterprise automation: Are we overdoing it?
Watch Now

Oracle CEO Mark Hurd said his company is betting that more than half of enterprise data will be managed autonomously by 2020 and include a heavy dose of artificial intelligence.

The outlook isn't surprising given that Oracle just moved to expand its autonomous technology across its cloud portfolio. The aim is to use machine learning to make app and data integration, analytics and system and identity management autonomous.

What Oracle is really looking to do is scale its cloud operations. Hurd said that Oracle has more than 5,000 customers for its cloud back office applications and plans to develop a big lead in SaaS revenue over the next four quarters.

"There are a lot of dynamics going on in the business world today," said Hurd. "B2B IT is roughly flat. GDP is slow. There's less growth in commerce around the planet. That's why IT budgets are flat."

The Oracle CEO added that companies will need to innovate with business models, products, services and experiences because economic growth isn't guaranteed. "AI will become integrated into anything. It's not a question of if, but when. This has everything to do with macroeconomics, business model strategy and technology," said Hurd.

Hurd's talk comes as Oracle outlined that its service level agreements will have a 99.995 percent availability guarantee for its Autonomous Database. Oracle also said it opened 12 new data center regions to expand across Asia, Europe and Americas.

Oracle's bet on autonomous management was outlined at Oracle OpenWorld last year. Applied to its database, Oracle said automating tasks would be more secure and allow admins to move to higher level functions.

Indeed, Hurd has a point about autonomous management and automation overall. Robotics process automation and serverless cloud services from the likes of Amazon Web Services, Microsoft Azure and Google Cloud Platform are proliferating. Meanwhile, enterprises are looking to automate as much as possible. Automation will change a host of jobs by 2020.

Most enterprise application providers are also looking to provide an automation assist. CA is looking to become a software factory enabler and automate development. Salesforce is touting integrated AI capabilities--via Einstein. IBM want to automate the grunt work of data science. Every vendor has an automation and AI spin.

Tech Pro Research: Software automation policy guidelines | IT leader's guide to the automated enterprise | TechRepublic: Automation is the only way to close the cybersecurity gap

To be sure, Hurd's 2020 predictions were designed to promote Oracle's wares. He said regulated industries will move half of their production workloads to the clouds via systems that site behind the firewall. Oracle has a few of those systems to sell you.

But overall, Hurd's take on automation and AI is on target even though you can quibble about the timing.