Asynchronous working could offer a different way of structuring the working week, say enthusiasts.
Written by Daphne Leprince-Ringuet on Sept. 16, 2020 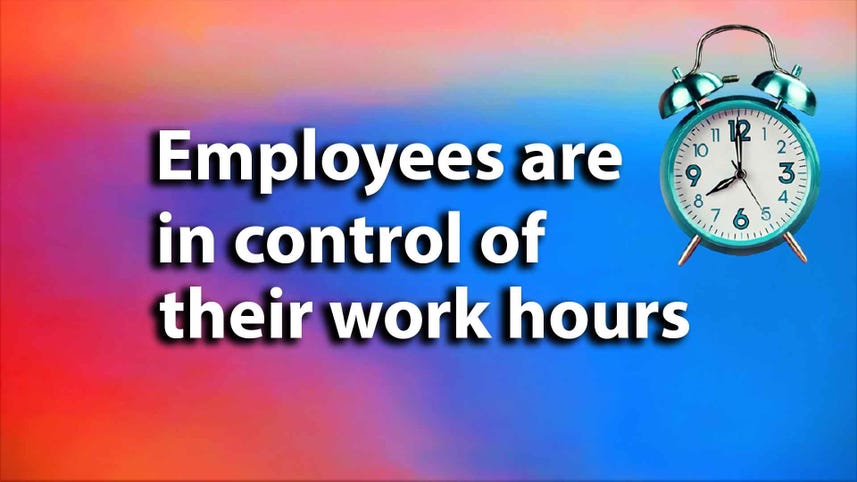 "So, your day is just getting started," says Darren Chait, the co-founder of connected meeting notes company Hugo, as he greets me on an early-morning Zoom call. "I'm about to log off."

While I sip on an 8am British-time coffee, Chait is preparing to relax after a long day of work. On his side of the screen, it's 5pm, Australian time.

Scheduling a call at a time that is suitable in both our time zones required some email back-and-forth, and a touch of compromise – I am, unashamedly, in pyjamas – but it takes a lot more to inconvenience Chait. Since the start of March, he has been running his San Francisco-based company from Sydney, coordinating between teams located on both sides of the US, as well as Brazil, while dealing with clients and partners based in Europe.

For the past six months, he's been working "in some kind of weird time zone," waking up at 4am to secure some overlap with the US east coast, working through the day with a solid break in the afternoon, and then sitting back at his desk until, roughly, Europe starts waking up.

"The big problem for me is Europe," he says. "You can't do the US, Australia and Europe. That's literally all the hours of the day."

Arguably, Chait's work style is odd, but it's not exactly one that he chose. At the start of March, he explains, as the COVID-19 pandemic started gathering pace, he traveled back from San Francisco to Australia for a ten-day break. By the time he landed in Sydney, Australians weren't allowed out of the country anymore.

Now in September, Chait's ten-day holiday has become a six-month deal. And all this time, he's been managing a company headquartered 17 hours behind him.

Long gone are the times when he could send an email and expect an immediate response from the recipient. Instead, Chait has come to embrace what is known as asynchronous working: the idea that each individual in a company can control their own timetable, and decide when they would like to be online and responsive.

The idea might sound diametrically opposed to most workplace-collaboration playbooks, and even more so since the COVID-19 crisis has been keeping employees at home. The past few months have been ripe with experts agreeing that business leaders should double down on communication with their teams, and calendars have been filling up with Zoom meetings of all sorts, lengths and usefulness.

"The idea of 'staying in sync' is funny, because in a way 'staying in sync' shouldn't be done in sync," says Chait. "Having everyone in the meeting and requiring everyone to be part of the conversation is a really dangerous, unproductive thing to do. Especially since we have the tech and the tools now to achieve the same outcomes, but on your own schedule."

Chait came to realize that insights and feedback could still be shared, even when half of his team was offline. So you've come up with a great idea in the middle of the US night? Instead of pinging a colleague or setting up a call for the next day, he records a quick video in his browser, using messaging app Loom, and sends it across.

Employees use the company's own product, Hugo, in every meeting to make sure that other members of the team can read up on the main topics discussed even if they weren't attending. And for every significant decision that a team member makes, they are asked to fill in a Typeform and to share it to Slack, for everyone else to understand the rationale and expected outcomes – even half a day later.

Although asynchronous collaboration was forced upon him and his company by a global health crisis, Chait says that he is not ready to go back to the old ways. "The time overlap has forced different behaviors, but we won't go back" he says.

"Their 2pm is my 4pm, so respect for people's time has really changed," he continues. "I only have a maximum of four hours overlapping with the east coast, so every meeting I'm squeezing in there is an opportunity cost. And every time, I ask myself: is it worth it?"

Meetings, the quintessence of synchronous collaboration, are a double-edged sword. While great ideas and better collaboration unquestionably come out of a team sitting together around a table with a packet of biscuits and a bunch of sticky notes, many employees also dread the hours spent in meeting rooms, carefully trying to check emails while only half-listening to what's being said.

Research from the University of North Carolina found that of the 23 hours that executives spend in meetings each week on average, eight are unproductive. An overwhelming 90% of people reported daydreaming in meetings, while another 73% admitted they used meeting time to do other work.

Keeping in mind the imperative of enabling higher quality communication, a few companies have now switched to fully fledged asynchronous working models. Doist, GitLab, Automattic, and I Done This, to name but a few, are now all actively encouraging their employees to do their own work in their own way.

SEE: ZDNet Recommends: The best products for every office

However appealing the concept may sound, Martha Bennett, principal analyst at research firm Forrester, insists that it is impossible to sign off synchronous working altogether. "You can't go forever without face-to-face interactions," she tells ZDNet. "Human dynamics are still important, and bringing teams together at least occasionally should definitely be on leaders' agenda."

Doist, for example, estimates that about 5% of its communication stack is still preserved for physical meetings, which include the company's annual team retreat, organized specifically for employees to connect on a more personal level.

But even when communication resources are balanced properly, implementing asynchronous working is a delicate game of management. Leaders should make sure that they are very clear about the expected outcomes, and start off by defining clear boundaries.

"I would recommend being a little bit more formal about arranging check-ins with people," says Bennett. "You can't jump in on employees and end up calling them while they were buying groceries or something like that. You need to make it very clear when you need somebody to be reachable at certain hours."

If it is done well, Bennett agrees that huge benefits can be gained from asynchronous working. This includes access to global talent: if a time zone is no longer a barrier to recruitment, nor is a national border.

More importantly, continues Bennett, you get happier employees. The observation echoes Chait's experience: the start-up CEO mentions a "better life balance" now that he gets more time with his 18-month-old every evening.

He is not the only parent out there who might appreciate flexibility in working hours; but family life is not the only example. "You have night owls, morning folks, people with different work styles," says Chait. "One of my engineers just really likes working in one big uninterrupted block, and meetings would demand that he make himself available, even if he was in the middle of something. Asynchronous collaboration has led to much greater productivity from those people."

SEE: Speed up your home office: How to optimize your network for remote work and learning

That is not to say that there are no costs associated with working when the rest of the team is offline. Although Chait is keen to encourage asynchronous working as the default method, even when he is able to get back to the US, he is also aware that the concept comes with some drawbacks.

"Work gets done, we are making progress, but you don't know what you don't know," he says. How many times has an innovative project started in casual conversation while grabbing a coffee? As far as virtual gatherings and Slack channels can get us, there are still some watercooler interactions that technology is simply incapable of recreating.

Chait is nevertheless confident that the benefits of asynchronous working will eventually offset the costs. As Hugo is a small company, he certainly welcomes the opportunity to put the theory to the test.

So long as he doesn't have to put up with a short-lived initiative of his to organize virtual beers on Fridays at lunch, New York-time – that is, 4am in Australia. In yet another lesson to be learnt from his forced asynchronous working experiment, Chait concludes: "Beer before breakfast, that really doesn't work."