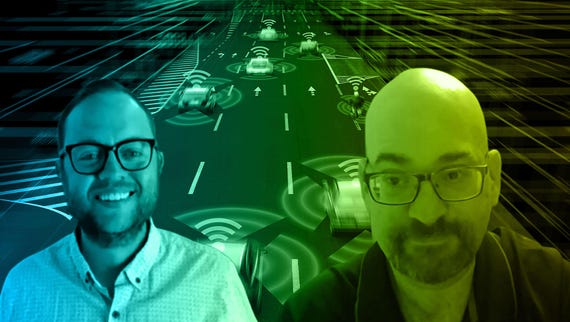 Sooner or later, everyone working in applied forms of machine learning goes after a use case that is going to yield tons of data, examples off of which to train a neural network.

It's the data, many believe, that very often is the biggest deciding factor in making a network useful.

That's the premise of Owlcam, a Palo Alto-based startup that sells a $349 camera for your car dashboard. It has been able to gather millions of videos from its users to refine its ability to detect crashes, to know when to capture video that can be used to handle insurance claims, or to detect an intruder to potentially solve car theft.

The product, in other words, is the young company's entrée into a big problem where there's lots to learn.

"Many people talk about doing machine learning, but with very little validation," says co-founder and CEO Andy Hodge. "You need large amounts of data, but you also need ground truth."

Also: Amidst furor over face recognition, Veritone promotes software's use in law enforcement

Hodge, who has spent decades as a product manager for some of the biggest consumer products ever, sat down with ZDNet at a rooftop bar in Manhattan and reflected on how the company originated in that focus on data.

"We didn't build a pitch book to raise money," says Hodge of the company's founding in December 2016, though the company has raised $28 million to date. "We went into my garage and built a cloud service and an iOS app and drove around with it."

"We said we would go consumer-first, and that would help us get the data we need."

Hodge was a product development leader for the first Apple iPhone, after years of running product development on the iPod. Hodge then went on to run hardware at startup Dropcam, later bought by Nest, and then served as general manager of Microsoft's Hololens augmented reality headset.

Hodge doesn't recall the very first time meeting Steve Jobs, but recalls arguing with him over things Jobs wanted for products, things that sometimes weren't possible. "Steve was incredibly good at figuring out if the person he was talking to knew what they were talking about," he recalls. He is left with the lasting impression that Jobs "was trying to make use of every minute" of life.

When it came time to ponder his next venture, "five of us were sitting around my house two years ago," Hodge recalls.

"We discussed how it was inescapable that people were going to build amazingly smart cameras. The question, we realized, was, Where would you put them?"

Also: Artificial intelligence and the future of smartphone photography

The answer was a place where lots of things happen: The car. "It doesn't take much to realize what happens in the home is on a smaller scale than what happens in the car. Ask a hundred people at a party, how many have had a home fire or a break-in, in the last five years, and it won't even be ten hands up," he says. "But ask who's had a dent or a car break-in, it'll be seventy or higher."

"What we realized is if you care about machine learning, you care about data sets and about things that happen often enough you can learn from it," explains Hodge.

The camera plus smartphone app fulfills a couple of different functions. One is to record video at the moment of impact in the event of a crash. The video is sent to your smartphone, so that you can use it to show authorities if and when they show up to investigate your incident. That video has cleared some drivers of fault in various collisions, Hodge says. A bundled service called "Owlcam 911 assist" is activated as soon as an incident occurs, and that service places a call to your phone to see if you need medical assistance, rather like the OnStar service.

At the same time, the Owlcam detects motion when the car is parked and you're not in it, which means if someone's broken in, the inside camera can capture the intrusion and alert you on your smartphone. The company says this has led to apprehensions of car thieves. The green activation on the LED may even be enough to deter some thieves, he points out.

The 4-megapixel front camera has a 120-degree field of view of the road ahead of you, and Owlcam has a touch-sensitive display, and a 4G LTE cellular connection. It connects to an app on iPhones and Android-based phones. It records video at 30 frames per second, with resolution of 1,440p for the outside camera, facing the road, and 720p resolution for its inside view of the cabin. The cellular service and the 911 assistance service are bundled into the $349 retail price for the first year, and the two services together cost a combined $9.99 per month after that.

Having sold over 25,000 units of the Owlcam since its debut in March of last year, the company has experienced a faster pace of adoption than Nest had, notes Hodge. The videos of incidents stay on a user's app by default, for privacy's sake, but customers can volunteer to send their videos to the company, and it turns out they do, in large numbers.

"There's a psychological benefit for some, to share what's happened."

"We have moved over ten million video clips since the start of the company, and we have had thousands of events where there have been people filing the video because it was a meaningful event," says Hodge. The company has amassed what it considers 125 million miles worth of road data at this point, including time and location and "a lot more."

Hodge has observed the failings of expensive products when they run up against real-world data. "At Microsoft, there were teams of brilliant PhDs" working on technologies such as the Xbox's "Kinect" sensor. "It was getting ready to launch, they had several million data points already, and then they realized they had a problem with lace curtains in Spanish homes: they would confuse the sensor."

The machine learning part of what Owlcam does is home-grown, so far. Using the data collected from users, in an anonymized fashion, Owlcam is refining the detection capability of the system. Hodge is short on details of the machine learning model, save to say that convolutional neural networks, or CNNs, the workhorse of computer vision systems, are involved, but in a relatively shallow network of just a couple of hidden layers.

"We have been surprised that relatively simple things work very well," says Hodge. To Hodge, it is all about having labeled data, from the incidents, that is the ground truth of road incidents.

"The biggest thing we are getting is more real world events," he says, including several hundred crashes and break ins to date. The algorithms running on the Owlcam and the companion app are not "universal recognition" in the sense that computer vision researchers aim for. Instead, it is "a targeted thing that we can get better at."

The company has been busy of late extending its go-to-market actions and its features. In May, it began distribution through Best Buy. This month, it signed a deal with insurance firm CSAA Insurance Group to let people file a claim in a car incident directly from the Owlcam app. Next up are deals with fleet owners, to expand the product from a consumer offering to an enterprise product.

If you buy the product, Hodge and his partners believe you'll consider yourself part of something larger than just your personal safety, though they emphasize the utility of the product. They hope you'll become part of a network of information on the road that is creating one hell of a database.

Join Discussion for: Owlcam bets the dash cam is the new frontier...