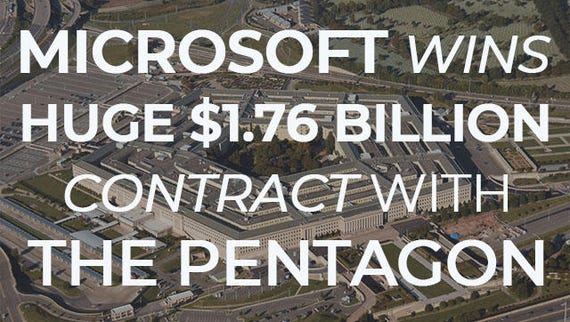 The Pentagon's inspector general is promising to conduct a swift review of complaints about conflicts of interest and misconduct during the bidding process for the Department of Defense's high-stakes $10bn JEDI cloud contract.

The DoD Office of Inspector General's probe into the JEDI contract will run alongside an internal Pentagon review announced on August 1 by new defense secretary Mark Esper.

Esper announced the review a week after his appointment, which happened shortly after US president Trump said he'd received complaints from "some of the greatest companies in the world" about the process.

Microsoft and Amazon are the last remaining bidders for JEDI (Joint Enterprise Defense Infrastructure), after IBM and Oracle were eliminated from the process in April.

The hotly-contested deal has been bogged down in protests from rivals, and court cases. Oracle filed a lawsuit last year accusing the Pentagon of violating procurement rules. However, a federal judge dismissed the suit in July, seemingly clearing the path for an expected decision by August.

IBM has criticized the structure of the contract, calling on the Pentagon to adopt a multi-cloud arrangement instead of selecting a single cloud provider. Google withdrew from the bid due to a lack of government certifications last October.

Given the current reviews, a decision on JEDI is unlikely to happen by the end of August, which would be almost two years after the Pentagon issued its request for information for JEDI, and one year later than the Pentagon hoped to have awarded the contract.

Defense CIO Dana Deasy told media last week it would take several weeks to brief secretary Esper and that the contact would probably not be awarded in August, according to The Wall Street Journal.

The Defense Inspector General's office, which is known to have been reviewing the bid process, said in a statement on Tuesday that is seeking to complete the review "as expeditiously as possible".

A spokeswoman for the office said it is investigating complaints referred by members of Congress and through the DoD Hotline.

"We are investigating whether current or former DoD officials committed misconduct relating to the JEDI acquisition, such as whether any had any conflicts of interest related to their involvement in the acquisition process," she said in a statement, according to The Hill.

"Our review is ongoing and our team is making substantial progress," she said. "We recognize the importance and time-sensitive nature of the issues, and we intend to complete our review as expeditiously as possible."