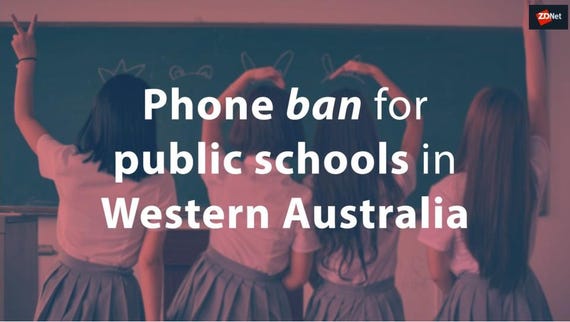 Public schools in Western Australia will soon implement a ban on the use of mobile phones, with Premier Mark McGowan touting the move as one that will create a better learning environment for students

From 2020, schools will stop students using their phones from the time they arrive at school until the end of the school day. This includes before school and at break times.

"We want to create the best possible learning environment for WA kids and our policy will allow students to focus on their school work without the distraction of a mobile phone," McGowan said.

"The policy will improve the health and wellbeing of students, by encouraging children to connect socially in class and in the school yard. Some schools have already adopted this policy, and the results have been very positive."

The Premier said the move is in response to concerns from parents and teachers about the pressures and demands that carrying a mobile phone brings to young people.

"Additionally, while it is recognised that cyberbullying mainly occurs outside school time, banning the use of mobile phones will reduce external issues being brought into a school via technology," he said.

The ban will extend to smartwatches, earbuds, tablets, and headphones unless students are under the instruction of a staff member. Smartwatches can be used if in "airplane" mode.

Those in kindergarten through year six will not be able to have their phones on them, but those from years seven through 12 are required to have the devices switched off and out of sight until the end of the school day.

Exemptions to the policy will be made for students with special circumstances, a joint statement from McGowan and Education and Training Minister Sue Ellery said. These instances are where a student needs to monitor a health condition, when under the direct instruction of a teacher for educational purposes, or with teacher permission for a specified purpose.

"Students are talking to each other face-to-face rather than texting and they're not distracted from their work during class -- overall those schools are much happier and connected places," Ellery said.

"I want that for all schools, which is why the new policy will roll-out across all public schools from the start of next year."

Ellery, however, said she is "absolutely" supportive of using technology as a tool for learning, and said the "off and away all day" policy doesn't limit those opportunities.

The Victorian government in June announced that from Term 1 2020, students in state primary and secondary schools will be banned from using their mobile phones, with the devices to be switched off and stored in lockers from the start of the school day through to the final bell.

Similarly to the WA government, Victoria labelled the move as one helping to reduce distraction in the classroom, tackle cyber bullying, and improve learning outcomes for students.

The ban was backed by federal Minister for Education Dan Tehan, who said it would be "wonderful" if other states and territories followed Victoria's lead.

"I think what we can't get around is the impact that phones are having when they are used in the classroom. They are a distraction, they also -- it's very difficult for teachers to teach when they're also trying to discipline against the constant use of mobile phones and particularly when we look at the impact phones are having when it comes to cyber bullying," Tehan said.

"For all these reasons I think by far the most common sense approach is to say mobile phones cannot be during class times at schools."