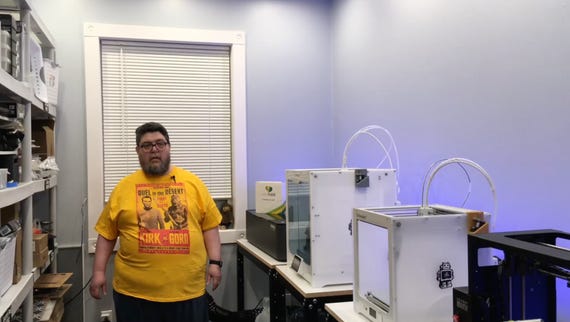 Why you need a filament runout sensor
Watch Now

The feature we're going to talk about is the filament runout sensor. As you might imagine, this sensor tells the printer when it runs out of filament.

On printers with a smaller build area, this might not be all that important. That's because it's less likely that you'll run out of a spool of filament with a printer that can't print anything particularly large.

But what about large printers with large build areas? It's entirely possible you'll want to print something that will take more than one spool of filament.

I like to keep one of my printers loaded with ColorFabb's PLA Economy White, which comes in a 2.2kg spool. It's convenient for some of the bulk printing I do for some of our family projects.

That said, a good 90% of the time, I'm using a 1kg spool. As the attached video shows, a 1kg spool doesn't hold enough filament for some prints.

The problem is, many printers don't know when you run out of filament. They just pull in filament using a geared mechanism. That mechanism does no reporting back to the printer. It just feeds, melts, and extrudes.

Some printers, though, do have a sensor -- called a filament runout sensor or a filament break sensor -- that tells when a spool is empty or no filament is feeding. These sensors report back to the printer's internal processor. When a runout is reported, the printer moves the print head away from the print and lets everything cool down until you replace the filament.

Once you load a new spool and thread the filament through the extruder, you can tell the printer to continue. If everything works, printing picks up right where it left off.

Even if your printer doesn't come with such a sensor, you can often add it. I'm linking to an $8 BIQU sensor that you can add to most printers.

I'm usually pretty good at working with the slicing program to estimate the amount of filament needed for my prints. But I have found myself relying on runout sensors, both for big prints and for spools that just happen to be near their end, as was the case with my print of Aria the Dragon.

My practical 3D printing advice is simple: if you're buying a new 3D printer, get one with a filament runout sensor. If you don't have one, see if it can be added and invest a few bucks to upgrade your printer. It's an inexpensive upgrade that can save you both time and money.

Join Discussion for: Practical 3D printing: The importance of...