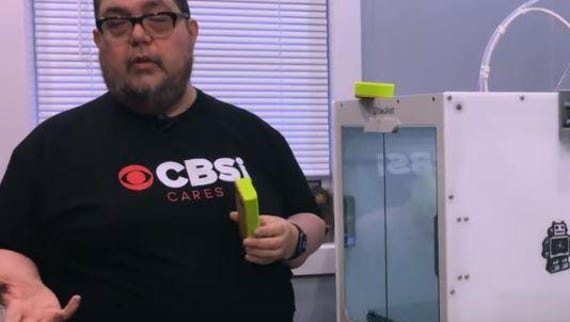 Welcome to the latest installment of ZDNet's DIY IT Discovery Series on 3D Printing and Desktop Fabrication. We're looking at the Ultimaker S5. There is a lot to discuss with this new flagship of the Ultimaker line.

One feature the S5 added over its predecessor is an end-of-filament sensor. If the machine runs out of filament, it pauses and lets you add a new spool.

The Ultimaker 3 was a little difficult in terms of changing filament. Most printers require some kind of contortion to get filament to load, whether its snaking filament past a gear, pressing a spring-loaded relief button, or threading a narrow path.

The Ultimaker S5 has a simple toggle handle. You lift the handle up, you push the filament up, then you drop the handle down. The filament changes are instant, simple, zero hassle. I love how this machine changes filament. It is a favorite, favorite feature and is making this one of my very favorite machines.

The S5 has an NFC sensor on the back for Ultimaker branded filament. If you just don't want to have any hassle setting up filament and putting it into Cura (Ultimaker's slicer), you just place the filament on its spool holder and the NFC will read the filament data and configure your slicer for you.

I haven't taken much advantage of the NFC feature, since it's limited to just Ultimaker filament. ColorFabb provided us with a ton of filament, enough to do the big prints you'll see in the video that accompanies this article, and a series of additional big prints you'll see over the coming weeks. I've also used some random filament I had sitting around.

Here's the big news. With the exception of one user error, not one print failed. The entire time I've been using this machine, the only failure I had was actually my own fault.

I loaded ColorFabb's copperFill, which is copper infused filament, into the printer and didn't read the directions.

ColorFabb recommends you change the flow rate from 100% to 108%. I didn't do that on my first test piece, which resulted in a failed print. Once I pulled out the test piece, and went back and read ColorFabb's instructions, I changed the flow rate. I went on to print an incredible piece -- a model of the Star Trek USS Discovery NCC-1031.

The S5 has a color display, unlike the Ultimaker 3, which had a blue and black screen. This new display is great, except for one of the color choices. In some of the menu items, there's white on light gray text. If you look straight at the text it is clear, but since most of us will be looking at the waist-high display from eye level, it's difficult to read. I'm hoping they fix that in a future software update, because that's a bit of a design fail.

Frankly, though, it's my only real complaint.

The machine does smart bed leveling. It tests across the entire build surface, rather than just at the corners. This allows the machine to build a representative mesh, accounting for any bed inconsistencies. The result is excellent prints.

The printer also has glass doors on the front, which help with heat management. This is an improvement on the Ultimaker 3, which had enclosed sides, but an open front. The S5 still has an open-to-the-air top, but the glass doors create a heat buffer that seems to have a very positive effect on print success.

Before I was brave enough to do the really big projects, I decided to do a number of test projects. I printed a hook for my wife's sewing room that allows her to hang a bunch of clothes off a special custom attachment mechanism I designed that works with some Home Depot plastic shelves. I printed another hook for those shelves that I just designed for a single hanger.

I printed a door knob hole cover that fits into a door. When we bought the house, there was an unsightly hole in one of our interior closet doors, so I filled that with a flat piece that has some bracketry to attach it to the door.

By this point, I was nearly brave enough to begin trying the big prints. But I was still a little bit nervous about what it would take to detach large prints from the glass bed. When printing something 300 by 300 millimeters in size on glass, something that could take days to print, I wanted to make sure I didn't break anything trying to get the prints off the bed.

I got in touch with the folks at Ultimaker. I spoke to one of their support guys, who told me that I should rub a glue stick on the build surface and print on that.

I told him I'd had problems in the past removing items that were adhered with glue stick and he clued me into the secret. He told me the secret was to wait until the build plate cools. If you wait and you're patient, the prints remove quite easily.

My other question was, "How do I clean off the glue stick each time?" My past technique — and I'm sure this is no surprise to anyone — was to take a hammer and chisel, or a hammer and a scraper to whack the glue off the surface. While my engineering degree credentials me to use a hammer to solve any mechanical or electrical problem (or at least feel better about not solving it), there's something a bit worrisome about hitting a glass plate with a hammer.

It turns out there's a better way. It's easy, too. Once you've removed your print and any remaining plastic debris, simply wet a paper towel and set in on the print surface on top of the glue stick residue. Leave it there for 15 or 20 minutes. That's it. Just leave it there. When 20 minutes have gone by, come back and wipe up the glue stick residue with the paper towel. That's it. That's all there's to it. It's clean. It's easy. It's fast.

Printing on this thing with bed adhesion, with the glue stick, as long as you follow those few simple best practices I've described, is surprisingly nice. I just really enjoyed it. And again, I've had no problems with it.

I live about 60 miles away from Mount Hood. When it's clear, I can actually see it from here. Naturally, my first big build was a Mount Hood sculpture, which is based on a scan of the terrain of Mount Hood. I downloaded the STL file from Thingiverse and printed it. I live in Oregon, so printing a Mount Hood was really fun.

It's big. It takes up most of the bed surface. And like I said before, I was a little bit nervous about removing it. I didn't need to be. It printed perfectly. I used the graduated print settings which meant that, instead of taking days, it took just overnight to print. See the accompanying video for some screenshots of those settings. They worked well.

My wife and I liked the print so much, we decided we were going to take it and hang it on the wall. We have a perfect spot in our entryway to do that, so I drilled a hole in it, and we hung it up.

That's because the saucer section isn't exactly balanced, especially when printing in the heavier copperFill filament. As the bed cooled, the adhesion reduced, so by the time the bed was fully cool, the extra overhanging weight from the saucer caused the print to detach and topple over. Fortunately, it was a strong print and there was no damage.

Together, the two segments make up a model starship that's about 20 inches long. As it prints, the copperFill looks more like terracotta than copper, but apparently it polishes to a nice sheen. That's a project for another week, but you can be sure I'll share it with you when it's complete.

Is it worth it?

Really, the answer to that depends on what you're going to do with it and what your budget is. If you're doing commercial work, it is absolutely worth it. It is probably the best 3D printer I have ever used.

I love the little LulzBot machines. I like my CR-10. I really like the Ultimaker 3. But this thing has a huge build area. It successfully prints on the huge build area, and it seems to print huge builds with zero problems. It's the easiest printer I've ever used when it comes to loading filament, it supports dual filament extrusion, and it doesn't lose any build area when you're printing multiple filaments.

If you are making jigs, or need manufacturing fixtures, or prototyping a product, or you're doing any kind of commercial activity, then the $6,000 is well worth it, particularly in terms of not wasting your time having to do redos or reprints.

I've been working with the S5 now for about two-and-a-half months and it seems to just work. I've done 10 or 12 smaller prints and the three big prints, and this printer has been rock solid.

I'm very impressed with this machine. Stay tuned in the coming weeks and months, because I have a bunch more big builds coming, along with a number of other interesting projects, including more Star Trek models.

What do you think? Do you have a project that's worthy of a machine like the Ultimaker S5? Are you creating a new product or building or making something great? Let us know in the comments below.

Disclosure: ZDNet earns commissions from some of the products featured on this page. Neither the author nor ZDNet were compensated by Ultimaker for this independent, unbiased review.

Join Discussion for: Is the Ultimaker S5 the ultimate Ultimaker...