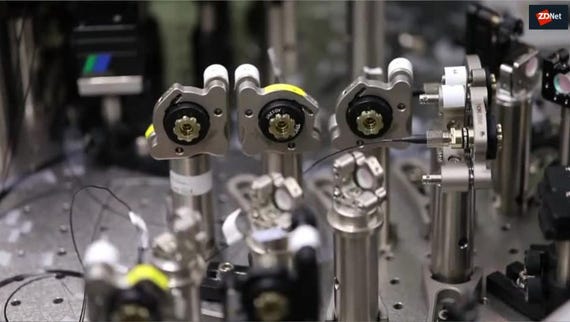 How would quantum computing change our world?
Watch Now

Quantum-computing company D-Wave has doubled the scale of its cloud-based computing platform and said it is already solving real-world problems in minutes that would take traditional computers a whole day of number crunching.

D-Wave, through a service called Leap, grants developers access to a cloud-based quantum processor that can be used to test and trial applications in real time.

In the previous iteration of Leap, the quantum processor was 2,000-qubits strong, with each qubit capable of connecting to six other qubits. D-Wave has more than doubled the performance of the technology: Advantage's quantum processor – which is available through the Leap platform – boasts 5,000 qubits, and each qubit can connect to 15 others. In other words, programmers will have access to a much larger graph to build their quantum applications.

As part of Leap, developers can also use a feature called the hybrid solver service (HSS), which combines both quantum and classical resources to solve computational problems. This "best-of-both-worlds" approach, according to D-Wave, enables users to submit problems of ever-larger sizes and complexities.

Advantage comes with an improved HSS, which can run applications with up to one million variables – a jump from the previous generation of the technology, in which developers could only work with 10,000 variables.

"With the million variables on the new hybrid solver, we really are at the point where we are able to support a broader array of applications," he continued.

A number of firms, in fact, have already come to D-Wave with a business problem, and a quantum-enabled solution in mind. According to Baratz, in many cases customers are already managing the small-scale deployment of quantum services, and are now on the path to full-scale implementation.

Baratz gave the example of Canadian grocery chain Save-On-Foods, which reached out to D-Wave a couple of months ago to find out if quantum technologies could help them better manage some of the logistics of their operations.

In the space of two months, D-Wave's team designed a concept and built up an application that Save-On-Foods is now trialing in one of the retailer's stores. Using a hybrid quantum algorithm, the Canadian company was able to reduce the time for some optimization tasks from 25 hours down to two minutes of calculations per week.

"They believe that it represents significant savings for them," said Baratz. "Of course, so far it has only been used in one store, but based on the results, the intention is to roll it out to every one of their stores."

Lowering the barrier to entry for quantum computing is, according to Baratz, one of D-Wave's objectives.

As part of the Advantage platform, the tech company has started a program called Launch, designed for businesses that want to build hybrid quantum applications but may need additional technical support.

Users can access Launch via D-Wave's website and fill out a form describing the business problem they wish to translate into a quantum algorithm. The company will then connect them to a developer from D-Wave or a partner expert to provide advice on designing, building and running the appropriate application.

"We think now is absolutely the best time to be doing this," said Baratz. "We are delivering very compelling technology and we are excited to be opening up the opportunity for businesses to make use of quantum computing."

A new survey commissioned by D-Wave, carried out among 250 Fortune 1000 companies, showed that while only 4% of businesses are currently developing their own quantum-computing applications, an overwhelming 81% of respondents reported having a use case in mind for quantum in the next three years.

Particular enthusiasm for the technology was found in the transportation, insurance, financial services and chemical industries; and at the heart of most respondents' interest was the drive to improve efficiency and profitability.

Hans Melo is the CEO of synthetic biology startup Menten AI and a long-time customer of D-Wave's. With his team of designers and engineers, Melo is using hybrid quantum algorithms to create new proteins that could eventually be used as therapeutic drugs.

Melo identified what he sees as an efficiency problem in the pharmaceutical industry: most drugs are currently discovered in labs by trial and error, with scientists testing thousands of molecules against a target until a successful match is found. The procedure is highly inefficient, according to the start-up CEO – and yet the approach has not changed for the past four decades.

With Menten AI, Melo is hoping to tap quantum computing and machine learning to design molecules specifically for a target. "In order to design a protein, you need to consider all the different possibilities in which it could fold," he explained to ZDNet. "That's a huge search problem: there are trillions upon trillions of possibilities, and you can't test them all in the lab."

"Our approach is to do this computationally," he continued. "But the search problem is so large you can't solve it on a classical computer. That's where quantum computing becomes useful."

SEE: The UK is building its first commercial quantum computer

Using D-Wave's hybrid solver service, Menten AI's team was able to design new molecules; the company has now tested some of the designs in the lab and confirmed that the technology's predictions matched real-life results.

But despite such encouraging developments, Melo is keeping a cool head. The moment of true excitement will come when Menten AI is sitting on a method that is demonstrably more effective than classical approaches. For now, said the start-up CEO, the experiment is still a proof of concept, and will be for the next few years.

"We are at a stage where it is actually feasible to apply quantum to a real-life problem," said Melo. "And we are going into the stage where it is not only feasible, but practical, as opposed to classical methods. We're thinking in three years, certainly before five years, we will be using the technology not only because we can, but because it's actually better."

For all the promises of quantum computing, therefore, it will still be some time before the technology becomes commercially viable and fully integrated into business models. D-Wave, for its part, is committed to scaling up the performance of its quantum processors, and to helping developers run applications that are increasingly complex. "We've proven that our technology continues to scale," said Baratz. "We're able to scale and we will continue to scale."

The Advantage platform is already available in the Leap cloud service, for all current customers to access with no additional charge. New customers will also be able to use all the new and existing capabilities on the platform.