Video: How to set up your Raspberry Pi 3 Model B+

In other words, the changes don't warrant calling it a Raspberry Pi 4, but there are noticeable improvements, including a faster processor, higher Wi-Fi speeds, and faster Ethernet.

The Pi 3 Model B+ has a 1.4GHz 64-bit quad-core Broadcom Arm Cortex A53-architecture processor compared with the Raspberry Pi 3 Model B's 1.2GHz CPU. It doesn't seem like much of a change but it does amount to a 15 percent performance improvement. 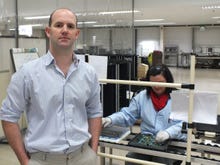 TechRepublic's Nick Heath got an early hands-on with the Raspberry Pi 3 Model B+ and found in benchmarking tests that it's the fastest Raspberry Pi model available, both in single-core and quad-core measurements.

Eben Upton, co-creator of the popular developer board, told TechRepublic that its B+ releases are all about refinement.

"It's not a Raspberry Pi 4. I think what we've ended up with is something which is a really good B+, a bit too good for a B+, but that would be not really anywhere near enough for a Raspberry Pi 4," said Upton.

"The B+ is our attention-to-detail spin for the product, where we take all the stuff we've learned in the past couple of years and smoosh it all together and make a new thing that addresses some of the concerns, or takes advantage of some of the opportunities that have come along in the intervening time."

Think there's a lot you can do with a Raspberry Pi board? With a few low-cost accessories you can get these boards to do a lot more - and thanks to extensive code libraries, you don't need to know much coding.

Canada looks to spark interest in computer science with the help of the BBC's micro:bit development board.

This comprehensive guide covers everything you need to know about the $10 Raspberry Pi Zero W, the latest tiny computer from the Raspberry Pi Foundation.

Instead of repurposing an older computer, help your kids build one of their own without spending too much.

Raspberry Pi 3? Everything you need to know about the tiny, low-cost computer

An introduction to the Raspberry Pi 3 computer, from how to set it up, to what you can do with it.