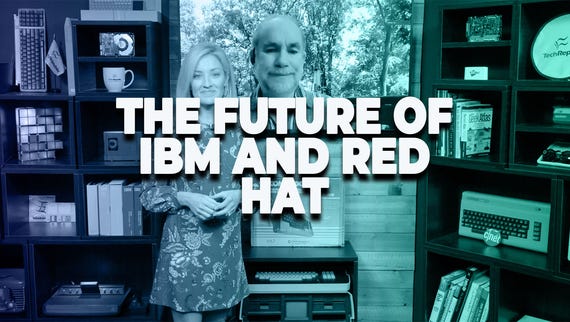 Many people are still waiting for the other shoe to drop now that IBM has acquired Red Hat. In a Reddit Ask Me Anything (AMA), Red Hat CTO and Linux kernel developer Chris Wright reassured everyone that Red Hat would be staying its open-source and product course.

Question number one was what are the plans for Red Hat's Kubernetes offering OpenShift. Kubernetes is vital for the modern-day hybrid cloud. Indeed, one of the big reasons why IBM bought Red Hat was for its hybrid-cloud expertise. That said, IBM has its own native Kubernetes offering, IBM Cloud Kubernetes Service for use on its private cloud offerings.

"The IBM acquisition has no effect on OpenShift/OKD. [OKD is the open-source community Kubernetes distro used for OpenShift.]' There are two important pieces here. First, Red Hat is still Red Hat, and we are focused on delivering the industry's most comprehensive enterprise Kubernetes platform. Second, upstream first development in Kubernetes and community ecosystem development in OKD are part of our product development process. Neither of those change. The IBM acquisition can help accelerate the adoption of OpenShift."

As for IBM's own Kubernetes offering, Wright had nothing to say directly:

"I can't really comment on that.  But I can say that IBM sees value in running their products on OpenShift across any footprint where OpenShift runs (on-premises or across public cloud providers)."

Perhaps more telling is, after a quick look at IBM's job ads, I found many OpenShift and Kubernetes openings, but none for "Cloud Kubernetes Services." It seems to me that moving forward, OpenShift will replace IBM's native Kubernetes offerings.

Wright added -- in a query about Red Hat's products being lost in IBM the way Sun's programs were after its acquisition by Oracle:

"Red Hat remains an independent entity, and we continue to do what we do best: engage with customers, partners, and open-source communities to build open-source solutions.  Those solutions focus on our hybrid cloud strategy. A key part of the acquisition is for IBM and Red Hat to work closely together to advance our customers' journeys to an open hybrid cloud. You've seen mention of IBM's plans to use Red Hat platforms as part of their offerings, so this is the other key piece here.  We stay independent, we share a vision, and IBM is building from our core platforms."

On a more general note, Wright reassured readers that Red Hat would remain committed to its upstream open-source work:

"It is a fundamental part of how we develop our sw products. Things like Network Manager create desktop usability, and can even be the impetus behind more core distro improvements.  The IBM acquisition doesn't change this at all."

One person asked would Red Hat staffers be more restricted with what they can do with open-source projects the way IBM employees were. Chris Ferris, IBM's CTO for Open Technologies, fielded this question:

"For the past five years or so, the policy for IBMers contributing to open source on their own time was relaxed such that they could do so with their manager's permission. . . We have been on a steady trend over the past five years or more to reduce the process barriers to both contributing to, and consuming open source, and we continue to review our policies periodically. With the acquisition now complete, IBM has chosen to adopt the same policy towards contributing to open source on one's own time as Red Hat has had historically."

This is a significant change in IBM's open-source policy.

Wright continued -- in another answer about open-source projects:

"Short version here, nothing changes.  Certainly not to what we have contributed. More importantly, our future contributions will follow the same pattern.  We contribute to open-source projects that are part of our product portfolio and focus on the areas that are important to our customers, which includes not just features but also long term maintainability (this becomes important in a codebase when you talk about architectural changes)."

Or, as Fedora project manager Matthew Miller recently answered, the question of, "What happens now to Red Hat's participation in the Fedora Project?":

Wright was also asked about what emerging technology he found the most exciting. Wright replied:

"Data-centric workloads and the ability for AI/ML really change how we turn data into information and knowledge. I believe this will have a profound impact on all of us. I also believe it will drive technology changes from hw to sw, which means it's interesting from the OS all the way up the stack. Now, I have to admit, from a pure scientific interest point of view, I find quantum computing fascinating. Very early still, but some interesting results are already being published."

So, with an eye on the future, while firmly staying the course with open-source, Wright sees good things ahead for IBM and Red Hat.