When IBM bought Red Hat, I thought it was the biggest open-source deal of all time. I was wrong. At $34-billion, it's the biggest software acquisition ever. So, why is IBM spending so much money? The reason is twofold. First, it's about positioning IBM as a cloud power. And, second, it's about investing in open source. The two are intimately connected.

Except for Microsoft Azure, the cloud is built on Linux and open-source software. Oh, and Azure? Linux virtual machines (VM) now make up half Azure's workloads. Many of those, by the by, are Red Hat Enterprise Linux (RHEL) VMs.

Also: Microsoft launched Azure 10 years ago and lots (but not everything) has changed

IBM has been supporting Linux and open-source software for decades. Big Blue didn't need to be sold on Linux.

And, when it comes to the cloud we're a long way from the days when former IBM CEO Sam Palmisano's said "You can't do what we're doing in a cloud." Today, IBM is a cloud believer. IBM Cloud -- formerly IBM Bluemix, a Platform-as-a-Service (PaaS) and IBM SoftLayer, an Infrastructure-as-a-Service (IaaS) cloud -- is also built on open-source software. The PaaS, for example, uses Cloud Foundry as its foundation.

What IBM didn't have, until now, was the expertise to build a top-notch hybrid cloud. As IBM CEO Ginni Rometty said on a Monday morning conference call the number one thing customers were telling IBM is that they want to move their corporate data "across multiple cloud environments with no lock-in." Together, "that's what the two of us will do."

What Rometty didn't mention is that many of IBM's existing cloud users are legacy IBM customers. With a great hybrid cloud offering, IBM and Red Hat can hope to find new customers. 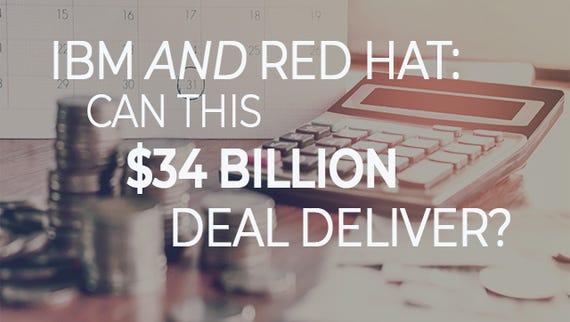 According to Rometty IBM customer surveys revealed that its clients have only moved 10 to 20 percent of their workloads to the cloud. Many of them also don't want to move their data -- lock, stock, and a barrel of bytes -- to a public cloud.

Who can blame them? You may know that statistically a cloud can be made as secure as your data center, but when one in four public cloud users report losing data on the public cloud, that sure isn't how it feels. Besides there's that gut feeling that your data is safer when it's physically under your control.

Also: Linux: The new frontier of enterprise in the cloud TechRepublic

This acquisition is not a move to directly compete with the 800-pound public cloud gorilla of Amazon Web Services (AWS). According to Synergy Research Group's latest public cloud report, IBM is in a distant third place, behind AWS and Azure with about 8 percent--and declining -- of the global market.

While there's been a lot of talk about hybrid clouds over the years, no one has mastered it. You had to create a cloud platform that could work from installations as small as a server room to the 50-thousand to half-a-million servers AWS deploys in a single Availability Zone. That's difficult.

Or, rather, it was difficult. With Kubernetes, it's become much easier. With Kubernetes you can orchestrate containers running workloads across both private and public clouds. It's far from simple, but it's doable. Companies such as Cisco, Google, HPE, and VMWare are already working on Kubernetes-based hybrid-cloud offerings.

So, once again why is IBM spending so much money on Red Hat? Because Red Hat, besides knowing Linux like the back of its hand, has an excellent Kubernetes distribution in OpenShift. And, this is important, Red Hat has numerous great open-source developers. That's vital because to make Kubernetes a much better fit with hybrid clouds, Kubernetes Federation needs to be perfected -- and it's a long way from there still.

If Red Hat and IBM programmers can work in harmony on using Kubernetes to build hybrid clouds, that $34-billion may end up sounding like a steal for IBM.

Join Discussion for: ​Why IBM bought Red Hat: It's all open source...