Called the Galaxy Note Fan Edition, or Galaxy Note FE, the company will sell a limited 400,000 units in the country.

The phone uses unwrapped and unused Galaxy Note 7 components, Samsung said, and is an "eco-friendly" project.

The Note FE shares the Note 7's design, but will have the UX of the Galaxy S8 and S8 Plus, which were unveiled earlier this year.

It also has 3,200mAh battery, smaller than the original Note 7's 3,500mAh. It passed Samsung's eight-point battery safety test introduced for all products after the Note 7, the company stressed.

Otherwise it shares the same specs as the original. It has a 5.7-inch QHD dual-edged display with an octa-core processor, and a 12 megapixel back camera and 5 megapixel front camera. It runs on Android 7.0 and has 4GB RAM, 64GB internal memory, and supports up to 256GB external memory. It is also IP68 water- and dust-proof.

In Korea, it will be launched in black, blue coral, platinum, and titanium.

The company will decide at a later date whether to sell the refurbished phone globally, it added.

Last year, Samsung recalled the well-received Galaxy Note 7 due to multiple incidents of batteries overheating and catching fire. The company eventually ended production of the handset and commenced an internal investigation. 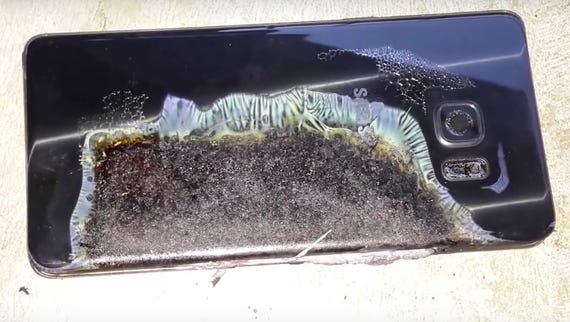