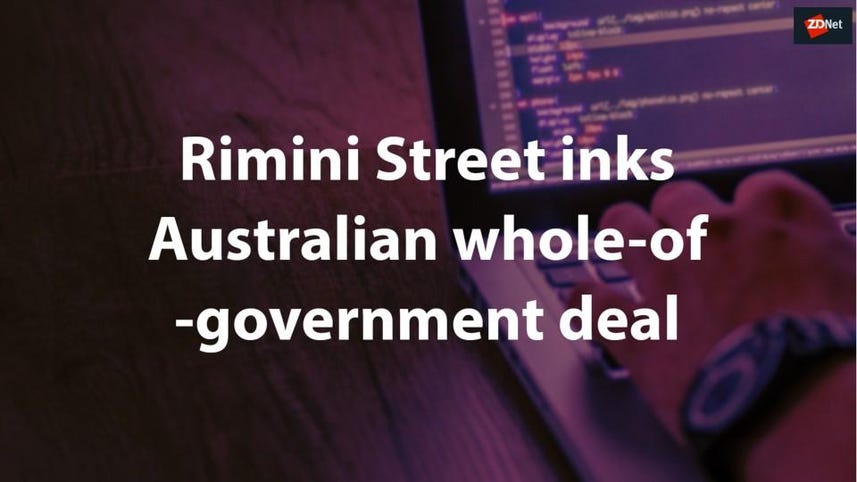 Rimini Street has signed a new whole-of-government deal with the Commonwealth of Australia, allowing all federal agencies and departments, as well as public universities and government-controlled corporations, to access its services.

The new agreement means government agencies looking to engage Rimini Street, which provides third-party enterprise software support, will be able to do so at a whole-of-government level.

"The DTA continues to expand whole-of-government volume sourcing agreements to ensure that agencies have ready access to the best pricing, terms, and conditions that leverage the buying power of government," Brugeaud said.

The volume sourcing agreement follows a similar one established by the DTA with Amazon Web Services (AWS) in June.

See also: Australia-wide AWS deal could signal the end for legacy IT procurement

The terms of the deal between AWS and the DTA were not disclosed, but the DTA in July 2018 had similarly awarded a AU$1.1 billion contract to IBM for whole-of-government IT.

In July 2019, the federal government also inked another deal with Microsoft Australia that was focused on Microsoft 365.

The three-year, whole-of-government deal makes Microsoft 365 available to all 98 federal government agencies, with the company expecting less than 2% of the Commonwealth to remain on legacy on-premise desktop licenses.

According to Microsoft, this agreement will help accelerate agencies' ability to develop and deploy new cloud-based digital services.

With IBM similarly banking on its long-held relationship with the federal government for the success of its contract, Microsoft Australia managing director Steven Worrall said he "deeply appreciates" the continued trust that this latest agreement signals.

Similar arrangements have also been established with SAP and Concur.

Speaking with ZDNet previously, former Rimini Street managing director for Asia-Pacific and Middle East Andrew Powell said while Australian organisations have taken to cloud at a more aggressive pace than their Asia-Pacific peers, they have also been more active in purchasing a suite of products centred on an ERP solution from a single vendor, buying maintenance and support, and upgrading when told to.

"So it's not like they're in the honeymoon phase with these vendors, they've had a 10, 15, 20 year relationship and that creates certain characteristics."

But with such long-standing relationships, Powell said the needle has started to shift and both private and government customers of the likes of Oracle and SAP are realising they have other options.

Back in 2016, Rimini Street was ordered to pay nearly $100 million to Oracle after a jury found that Rimini infringed 93 Oracle copyrights.

Vendor loyalty for maintenance and support in Australia is declining, Rimini Street managing director for Asia-Pacific and Middle East has said.

From Oracle to Rimini Street: TransGrid to reap rewards from the vendor duel

There's a strategic advantage in going away and coming back, TransGrid ICT planning and architecture manager has said.

After the high court agreed to consider a technical legality in Oracle v. Rimini Street, both sides made clear there's no love lost between the two companies.

Meanwhile, the support services provider said it's searching for a new CFO and reported its Q3 financial results.