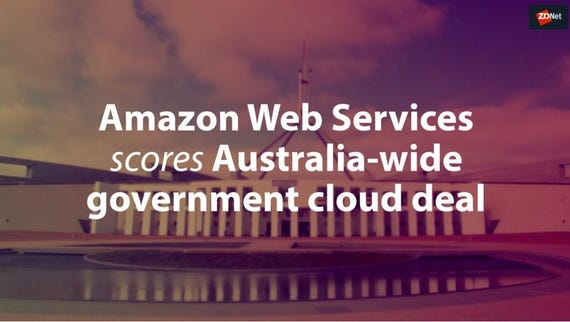 Amazon Web Services (AWS) has signed a new whole-of-government deal with the Commonwealth of Australia, allowing all federal, state, and territory agencies and departments, as well as public universities and government-controlled corporations, to access AWS Cloud services.

The arrangement comes by way of a "simplified procurement model" that is outed as allowing agencies to save costs from the day they sign up, due to the economies of scale.

The terms of the deal between AWS and the Digital Transformation Agency (DTA) were not disclosed. The DTA in July 2018 awarded a AU$1.1 billion contract to IBM for whole-of-government IT.

"Government agencies regularly engage AWS services, each with separate contracts. The new arrangement represents an opportunity to provide cost reductions through efficiencies of scale," he said.

"Over a number of years, aggregated procurement has allowed us to leverage the bulk-buying power of the government to negotiate consistent and improved terms and conditions."

Protected-level certification is currently the highest security level approved by the federal government.

The company was given the green light for 42 AWS services at this level, including compute, storage, network, database, security, analytics, application integration, management, and governance.

It also follows the February 2018 publishing of the Australian government Secure Cloud Strategy, which lighted a fire under the agencies yet to embark on a transformation to the cloud by offering a guide detailing the foundations for "sustainable change".

In developing the strategy, the DTA said many agencies would need to change the way they operate to make the most of it.

AWS was in May announced as the IT partner for the 2021 Census, with the Australian Bureau of Statistics to be handling the nationwide data collection event on the AWS cloud.

The DTA is also using AWS to deliver its cloud-based platform for hosting website applications, cloud.gov.au.

See also: How the ABS prepared for the same-sex marriage survey using the public cloud

MORE FROM AWS IN AUSTRALIA