Full Bio
Posted in Between the Lines on September 27, 2010 | Topic: Hardware

"We must protect this house."

Research in Motion's BlackBerry PlayBook has arrived and the goal is very clear: Protect the company's enterprise turf and preannounce an early 2011 product that may make it into the IT budgeting process. At the very least, RIM is hoping its PlayBook can at least pause Apple's iPad corporate encroachment.

In many respects, RIM got back to its roots with the pitch for the PlayBook (Techmeme).  If RIM can't beat the iPad on the consumer front it certainly can provide integration with all the server and security features the company offers on the back end with the introduction of the PlayBook.

RIM might as well have emulated those Under Armour commercials where football players start chanting "we have to protect this house."

Let's recap some of the key RIM phrases from the BlackBerry developer powwow and statement:

Now in between those enterprise messages were other key specs like support for Adobe Flash, HTML 5 and other goodies like media management, ad platforms and perks for Web developers. But it's clear that RIM is positioning the PlayBook as an enterprise device---because a consumer isn't going to care that QNX runs critical infrastructure. It's not that much different than what Dell is trying to do with its Streak. 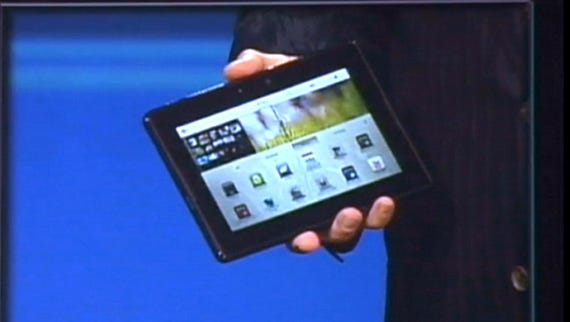 That RIM positioning is critical since the enterprise is the company's core. If the enterprise goes, RIM is toast. It's really that simple. With the PlayBook introduction, RIM has at the very least planted some doubt among enterprise customers that were pondering iPad pilots.

For good measure, RIM teamed up with Oracle, IBM and SAP to talk enterprise super apps.

Add it up and RIM is just doing what it does best: Protecting its enterprise house.