The company says technology will help it achieve its goal of having net zero emissions by 2050.
Written by Aimee Chanthadavong on Feb. 26, 2020 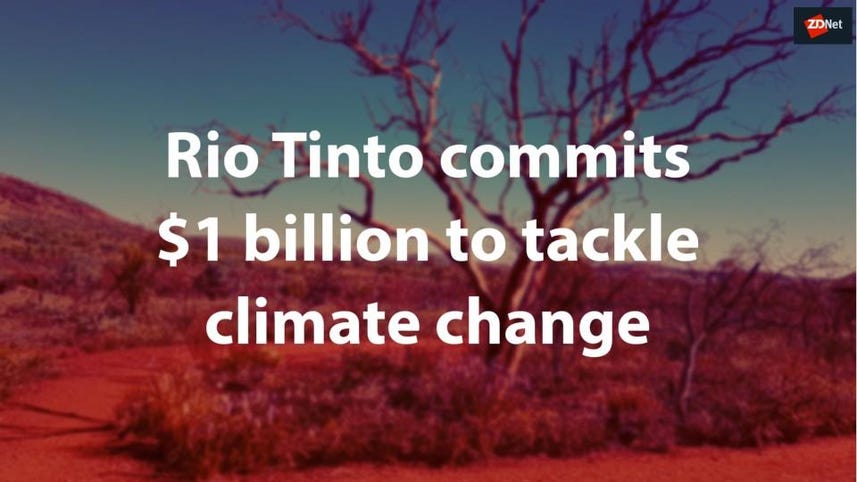 Rio Tinto has announced it will invest approximately $1 billion over the next five years to tackle climate change as part of the company's ambition to get operations down to net zero emissions by 2050.

During a presentation of the company's full-year results, Rio Tinto CEO Jean-Sebastian Jacques provided an update on the company's climate strategy, declaring that the growth of the company from now to 2030 will be carbon neutral. The company will also invest in new technologies to achieve that, it added.

"Our ambition is clear: to get to net zero by 2050.  This is a massive undertaking.  It means all of our future growth will need to be carbon neutral.  And we will need new technologies and partnerships.  We do not have a roadmap, but we are working on it," he said.

Jacques detailed how some of the key technology investments would involve working with industry to research and develop new tailings solutions; increasing capability to enhance water use and reduce waste; deploying existing renewable energy technologies; deploying hybrid and electric equipment; and continuing to produce carbon-free aluminium through its joint venture -- known as Elysis --  with Apple, Alcoa, and governments of Canada and Quebec.

He added that as Rio Tinto works towards its 2030 targets, the company will aim to reduce an additional 30% in emissions intensity and an additional 15% in absolution emissions from its operations.

"Our targets were developed through detailed marginal abatement cost curve (MACC) analysis, asset-by-asset.  But of course, we will try to do better and more, quickly.  We believe it is now about action and results."

Jacques outlined some of the work so far by the company has included moving 76% of the company's electricity consumption at its managed operations to be supplied by renewable energy; completing removing company activities away from mining coal, or extracting oil and gas; and investing $100 million towards building a solar battery plant in Pilbara.

Rio Tinto's profit after tax for the full year came in at $7 billion, half of last year's results, which the company' attributed to "non-controlling interests".

It also reported underlying earnings before interest, tax, depreciation and amortisation (EBDITA) was $21 billion for the period, up 17% year on year from $18 billion. Likewise, underlying earnings moved up 18% from last year's $8.8 billion to $10 billion