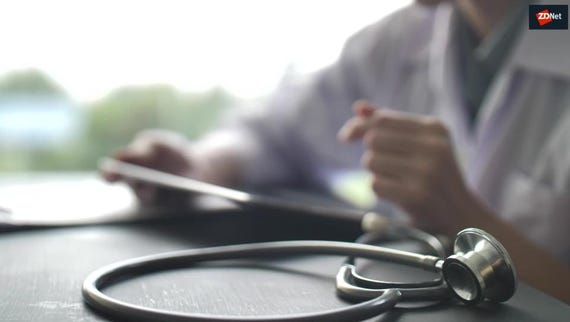 Healthcare has often been sat on the sidelines when it comes to digital innovations. Part of that is because these services are often under-funded and what resources they do have are channelled into front-line care as much as possible. But it's becoming increasingly clear that technology can play a role in helping doctors deal with the ever-rising pressure to deliver more services. The response to the cornonavirus crisis, which has seen the broad adoption of everything from video conferencing to AI, is unlikely to be undone; expect the future of healthcare to feature more data analysis and automation.

The rise of the mechanical medic

With many of those contracting COVID-19 picking up the disease in hospital and medical staff suffering significant levels of infection themselves, robots could offer a way of delivering hospital care while reducing the chances of person-to-person transmissions.

Prior to COVID-19, robots were mostly used in operating theatres, under the control of surgeons. Now the virus is seeing robots take up new roles in hospitals, replacing clinical and other hospital workers to help with medical care and the logistics of running hospitals.

Danish company UVD Robots deployed its self-driving robots to a number of hospitals earlier this year; the machines can disinfect wards of bacteria and viruses using UV light. In Wuhan, the epicentre of the COVID-19 outbreak, robots have also been employed to deliver food and drugs to patients on coronavirus wards. Other robots have been pressed into service monitoring patients for symptoms of coronavirus, including checking their vital signs, while telepresence robots have been enabling doctors and patients to talk without having to be physically together.

There are concerns over whether the robots will be able to fulfil all the same roles as human clinical staff, however.

"When autonomous care and testing robots are used with patients and/or elderly people in the context of this pandemic consideration must be given to the potential impact upon privacy, human dignity and autonomy, and the possibility of technical and (false) emotional dependencies, that may be accentuated owing to the loneliness and other vulnerabilities generated by the quarantine and social-distancing norms adopted," a report by the European Parliament into technology to fight COVID-19 notes, before going on to ask: "Robots might be able to replicate some vital care services provided by humans, but what about the important companionship and empathic aspects of human care?"

Post-coronavirus, the appeal of robots is likely to remain strong. The pitch of healthcare robotics companies is likely to be that using robots will take repetitive jobs from the hands of overworked medical staff to free them up to spend more time with patients.

But in reality, as well as doing routine ward work, it's likely that robots will end up taking over the patient face time too, reducing the time patients would typically spend with nurses and care assistants, and leaving them far longer periods without human contact.

With the costs of providing healthcare and demand for health services both growing, combined with a shortage of medical staff in some areas, it's likely that some of the most vulnerable patients will increasingly be looked after by mechanical medics. Given the costs of such robots, however, it's likely to be a change in the long, rather than short or medium, term.

Along with robots, drones are being enlisted as a way of stopping the person-to-person spread of coronavirus. Deliveries made by drone rather than by truck, for example, remove the need for a human driver who may inadvertently spread the virus.

A number of governments have already drafted drones in to help with distributing PPE to hospitals in need of kit: in the UK, a trial of drones taking equipment from Hampshire to the Isle of Wight was brought forward following the COVID-19 outbreak. In Ghana, drones have also been put to work collecting patients samples for coronavirus testing, bringing the tests from rural areas into hospitals in more populous regions for testing. Meanwhile, in several countries, drones are also being used to drop off medicine to people in remote communities or those who are sheltering in place.

Drones have also been used to disinfect outdoor markets and other areas to slow the spread of the disease. And in South Korea, drones have been drafted in to celebrate healthcare workers and spread public health messages, such as reminding people to continue wearing masks and washing their hands.

The pandemic has also seen drones used to enforce quarantine or lockdown measures and monitor the temperatures of the local populace to screen for the disease, or detect sneezing or coughing in crowds.

Not all of these experiments are likely to be continued with long term. Business models that predate the pandemic, however, are likely to profit from the virus. Drone delivery of medicines and supplies to traditionally underserved communities is likely to take off in a more significant way post-pandemic, provided the economics can be made to work. But as with the various contact-tracing apps being used, there are big questions about how drones and of other surveillance technologies in an emergency context could end up reducing our privacy.

App based healthcare – and surveillance

Since the start of the pandemic, governments and health authorities around the world have turned to mobile apps as a way of monitoring the health or movement of their populations.

Government-sponsored health-focused apps have taken a number of different forms. In several countries including Argentina, for example, governments ask those entering the country to download apps that monitor their location, to ensure they're not breaking quarantine; others like Hong Kong have done similarly, but with a wearable bracelet synced to the app. As well as apps to track the movements of citizens on an individual level, some governments have opted for apps that gather data, which is then used in aggregate to monitor broader population movements and so inform how the virus might spread.

Apps for contact tracing have been rolled out in a number of countries, as a means of identifying those who have been in contact with individuals that went on to contract COVID-19, often using Bluetooth data from their phones. Symptom-tracker apps have also been launched by numerous governments and health authorities.

SEE: From open source to AI, tech is changing everything about the future of medicine

While these apps' primary purpose may be to prevent or slow the spread of coronavirus, they also open the door to potential misuse by governments interested in exploiting them for broader surveillance purposes: after all, with the virus still infecting and killing so many people worldwide, citizens may be more willing to share their information than they would otherwise be, and it's easy for authorities to argue that individuals are facing a choice between privacy and pandemic.

"What's being attempted with these apps is the accumulation of data on every person you've interacted with and possibly every location you've been. This has never before been done on this kind of a mass basis: it's never been recorded centrally by any government in history because it's not been possible," campaign group Privacy International writes. "No government has ever known as much about you as they may be about to."

But health and population tracking doesn't necessarily have to come at the expense of privacy. Françoise Baylis, research professor at Dalhousie University, told the recent CogX event there is an assumption that we're in a crisis situation and we're going to have to deal with difficult tradeoffs.

"The one that's presented is the tradeoff between privacy and health. If that's the tradeoff that's put to most people, many of us would choose health." But Baylis said this is not necessarily the right starting assumption: "We shouldn't have to frame the problem as one or the other, in fact we should be looking very carefully to figure out what are the technologies we can put in place and use in order that we can have both."

Join Discussion for: Robots, drones and surveillance apps: The...