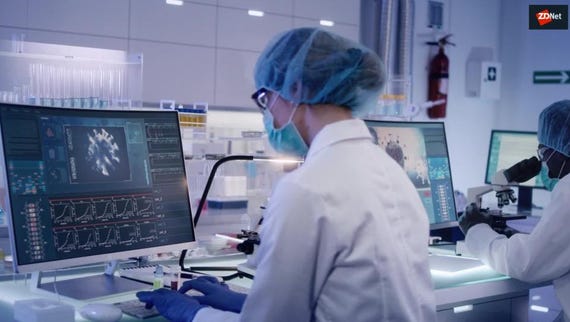 With drug development front page news around the world, a quieter story is spreading in automation circles: The rise of robots as indispensable lab tools in drug development. As the need for faster drug development surges, manufacturers and researchers have adopted systems that promise new levels of efficiency and accuracy.

My colleague reported on the latest example this week, an AI platform and automated drug lab from IBM, which could cut the cost and time associated with drug discovery and synthesis. The IBM system uses computational modeling and predicts chemical reactions in order to aid human chemists in the creation of new molecules. The process allows biochemists to work remotely via an automated lab.

A chemist could be sitting at home who was willing to make a molecule, and after connecting to RoboRXN for Chemistry via a web browser, they draw the molecule.

Once submitted, RoboRXN would self-program itself to "execute the process in an autonomous laboratory." In other words, experiments could be conducted remotely with the right integration and hardware setup.

It's part of a broader trend toward automation in the hard sciences, which, somewhat ironically given their scientific bent, have been slower than many other industries to embrace automation technology. The barrier to automation has long been a difficult combination of intense regulation, budget constraints, and a trade tradition of seasoned craftsmanship on the lab bench, all of which have slowed the adoption of lab automation.

There has also long been a labor case against automating laboratories. Grad students and interns work impossible hours for little or no pay in academic and clinical settings, where future scientists and researchers learn the ropes and much of the science underlying drug development originates. And because labs often fall under the managing jurisdiction of a highly-credentialed and invariably busy person, it can be difficult for companies to market their products to anyone with decision-making capabilities.

The coronavirus has upended that paradigm. With barriers to working in person, many research institutions are left scrambling to find a way to do hard science. Essential worker exemptions have allowed many drug manufacturers to continue working (a Gilead facility in the south bay region of Los Angeles is thrumming with activity these days; Gilead manufactures Remdesivir, which is being used in some COVID-19 treatment protocols), but the lockdowns have only accelerated the glance toward automation in the hard sciences, a trend seen in industries as disparate as fast food and grocery delivery.

That realization coincides with a decade of falling sensor prices and increasing market penetration of robots, which have brought the costs of automation technology down. That's led to spiking interest in automating tasks like liquid-handling, which is a notoriously error-prone component of work in the hard sciences.

A Swiss company called Andrew Alliance, for example, makes liquid-handling robots for life sciences labs and has raised millions in backing. Andrew Alliance's flagship product is a tabletop robot that fits in a footprint about the size of piece of notebook paper. Thanks to advances in collaborative automation, the robot is ready to go out of the box and is easy to operate.

Another company called Opentrons makes a pipetting robot for use in labs and has the goal of becoming the "PC of biology labs."

Pharmaceutical giant AstraZeneca is behind an open innovation initiative to develop next-generation medicines and technologies. According to the Alliance of Advanced Biomedical Engineering:

A cornerstone of the initiative is NiCoLA-B, a drug discovery robot at the U.K. Center for Lead Discovery, the company's research center on the Cambridge campus. Its name is a variation of the moniker for the entire robot system: CoLAB (collaborative laboratory), which was developed by HighRes Biosolutions. The robot can test more than 300,000 compounds a day in a ballet of procedures with a central, mechanical arm as the lead dancer: the company says it is the fastest of its kind in the world. AstraZeneca explains that the robot uses sound waves to move droplets of potential drugs, billionths of liters at a time, from storage tubes into miniature wells on assay plates. Droplets of cells or biochemical solutions are added to the wells, and the robot monitors interactions for any activity that could indicate a promising drug.

One of the tremendous advantages of a system like this over human biochemists is that the robot can run for 24 hours per day, seven days a week.

The IBM system is an exciting illustration of the advantages that AI and automation technologies, especially robots, can bring to the drug discovery process. Given the times we live in, we can use all the advantages we can get.