Full Bio
Posted in Zero Day on April 14, 2020 | Topic: Cyberwar and the Future of Cybersecurity 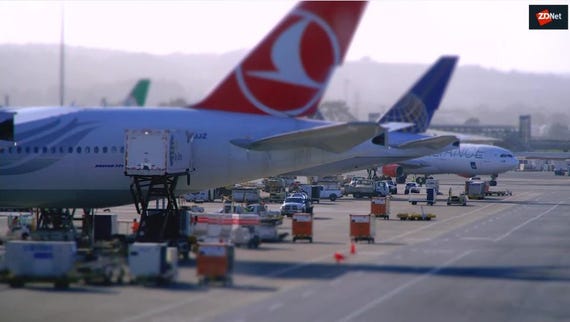 The hacks took place last month, in March, according to a data breach notification [PDF] posted on the airport's website.

According to San Francisco airport officials, hackers breached both websites and planted code that exploited an Internet Explorer bug to steal login credentials.

"The intent was to collect Windows credentials (username/NTLM hash) of visitors by exploiting an SMB feature and the file:// prefix," the ESET research team said.

ESET said the attack was carried out by a threat actor known as Energetic Bear (also known as DragonFly). The group has been active since 2010 and is believed to be operating on behalf of the Russian government.

The group is one of Russia's most active state-sponsored entities. Over the past decade, Energetic Bear hackers have been behind a widespread hacking campaign that targeted organizations all over the world.

The group's primary targets have been organizations in the energy sector -- hence its name of Energetic Bear -- primarily those located in the Middle East, Turkey, and the US.

However, Energetic Bear has also recently began targeting other types of organizations as well, including companies in the aerospace and the aviation sector, according to a report published by Kaspersky in April 2018, and an alert sent at the time by the US Department of Homeland Security.

In fact, the same Kaspersky report details a series of watering hole attacks carried out by Energetic Bear that used the same "file:// prefix" trick to obtain NTLM hashes from users visiting a compromised website.

"This technique has been used for years by Energetic Bear/DragonFly," Matthieu Faou, malware researcher at ESET, told ZDNet in an interview today.

We also asked Faou to expand on the company's tweets and inquired if this hack is part of a new campaign aimed at the US aviation sector.

"We don't have any information about the compromise of another airport website," Faou told us. "According to ESET telemetry, the other websites that were recently compromised are mainly media websites in Eastern Europe."

Faou said that when they detected the technique being used in the wild again, they "reported it immediately to the SFO airport team" who "quickly removed the malicious piece of code from their website."

Airport officials than followed through by forcing password resets for "all SFO related email and network passwords on Monday, March 23, 2020."

The password reset is enough to prevent hackers from using the stolen NTLM hashes for any future intrusions.

However, the two websites were also used by other users who were not airport employees. Through its public security breach announcement, the San Francisco airport is now urging users who recently visited the site to take similar actions and reset their Windows passwords.