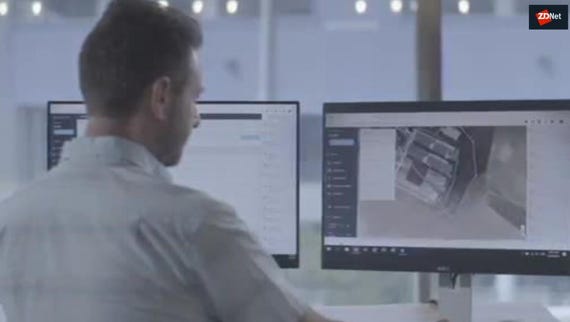 The COVID-19 pandemic has brought big transport and delivery problems to economies and businesses around the world, prompting authorities and companies to search for ways of easing the massive pressure.

One possible solution lies in drone deliveries. The drone transport industry in the EU reached a milestone in late November with the announcement of the world's first cargo droneport network.

The project will include private airports and airport groups operating across more than 35 airports in 11 European countries. The effort is being led by Dronamics, a Bulgaria-based developer and operator of large cargo drones, founded in 2014.

The first five airports in Dronamics' European network are in Belgium, Croatia, Finland, Italy, and Sweden, the company tells ZDNet.

According to the company's CEO, Svilen Rangelov, the main goal of this network will be to ensure a same-day shipping service within the EU in the next few years.

"In a post-2020 world, it is increasingly important to ensure that same-day shipping is available not just in big cities, but in every community, no matter how small or remote," Rangelov tells ZDNet.

"We're starting with Europe not just because our 2,500km, 1,550-mile range allows us to cover the whole continent in one flight, but also because the EU and EASA have shown remarkable regulatory leadership in the field of air mobility."

The problem of drone regulations differing from country to country has stalled such efforts in the past. But that's all about to change starting from January 1, 2021. From next year, the EU is expected to standardize drone regulations, with a new set of rules replacing EU member states' existing regulations.

Dronamics is already preparing for the necessary certification and expects to launch the first commercial flights of same-day drone cargo services by early 2022. The company will operate same-day flights within the network with its flagship Black Swan cargo drones, each having a capacity of 350kg and range up to 2,500 kilometers – 772lb and 1,550 miles.

According to the operators of the airports that form the network, this technology can also provide vast opportunities for global supply chains.

"Earlier this year the whole world saw the effects that border closings and strict quarantine measures had on global supply chains, as the world was and still is combating the COVID-19 pandemic," says Massimo Roccasecca, group cargo director at SAVE Group, the operator of Brescia Airport.

"But when you have a way to move cargo without traveling with it, supply chains become lockdown-proof."

Industries that can benefit from having this type of logistics include e-commerce and pharma.

Steven Verhasselt, commercial director of Liège Airport, believes that unmanned air freight will be an important part of the future of the logistics industry.

"With the capabilities of the Black Swan, Dronamics taps into the growing segment of on-demand same-day delivery in e-commerce, pharma and time-critical cargo," he says.

The potential that drone technology has can be seen through its many different capabilities. In September, Latvian mobile operator LMT successfully completed the first cross-border drone flight conducted entirely over the mobile network. The drone was flown from Latvia to Estonia without losing mobile network connectivity.

The ability to cross borders easily while maintaining connectivity would make it possible for drones to participate in international transportation projects, such as implementing railway safety measures by monitoring and maintaining tracks that are in border regions.

Ingmars Pukis, LMT's vice-president and board member says currently, most drones are based on Wi-Fi connections or other frequencies provided for drone management.

"In contrast to the mobile network, those are limited in their range," he tells ZDNet.

"If there's sufficient coverage in the air, the mobile network can ensure uninterrupted connectivity throughout the entirety of its flight, which significantly improves safety."

While Dronamics is planning to expand its network on other continents as well, the lack of regulations is still one of the biggest challenges so far, even on European soil.

Dronamics' Rangelov says, for example, there is a lot of demand in the Balkan region.

"But the lack of regulations is what is most troubling at the moment," he says.

"Our end goal is to enable same-day air deliveries for every single person on the planet at a cost that everyone everywhere can afford."

Join Discussion for: Same-day shipping by drone: This international...