The technology was tested with a handset, 5G base station, and 5G core network equipment in Tokyo.
Written by Cho Mu-Hyun, Contributing Writer on Sept. 22, 2020 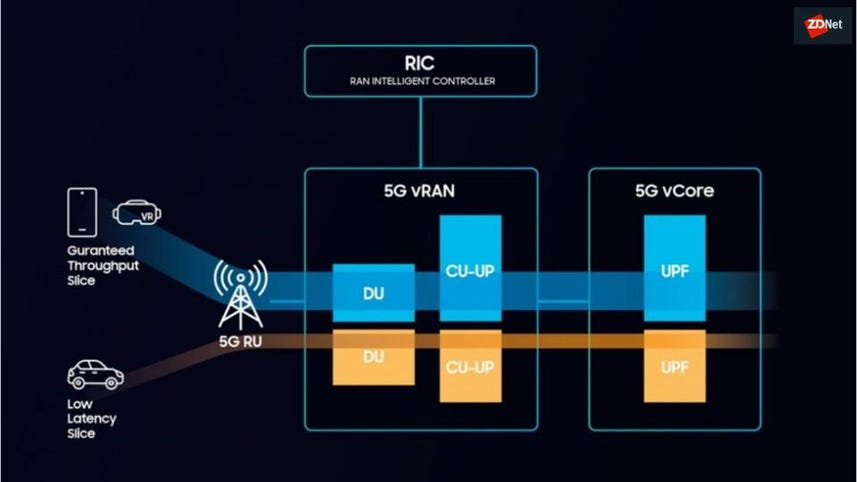 The test was done in a Tokyo lab that used a RAN intelligent controller with a handset, 5G base station, and 5G standalone core equipment, Samsung said.

5G network slicing is a network architecture that enables the multiplexing of virtualised and independent logical networks on the same physical network. Each slice is used for different tasks to allow networks to be ultra-fast and have ultra-low latency.

The technology will help with services such as autonomous driving, cloud gaming, and industrial Internet of Things applications thanks to low latency and high reliability, Samsung explained.

Samsung and KDDI's test also showed that users can switch between an ultra-fast virtual network and an ultra-low latency network without compromising connection quality for certain services, the South Korean tech giant said.

Moving forward, Samsung and KDDI have plans to propose an international standard for the technologies that were verified in its end-to-end 5G network slicing test.

KDDI launched its 5G services in March and is a major customer of Samsung Network.

Earlier this month, the South Korean tech giant announced that US telco Verizon also signed on to use its network equipment. The deal will see Samsung provide $6.6 billion worth of network equipment to the telco.

Samsung to supply Verizon with $6.6 billion worth of network equipment

The deal indicates that the South Korean tech giant will be a major part of the US carrier's 5G rollout.

Samsung leads the pack in granted patents for 5G, according to a German study.

Samsung will later update the solution to allow field engineers to adjust the antennas of base stations from their smartphones on the ground.

It will be the first foray into New Zealand by Samsung's network business.

Samsung's profit drops for the first time in 3 years

Samsung's profit drops for the first time in 3 years