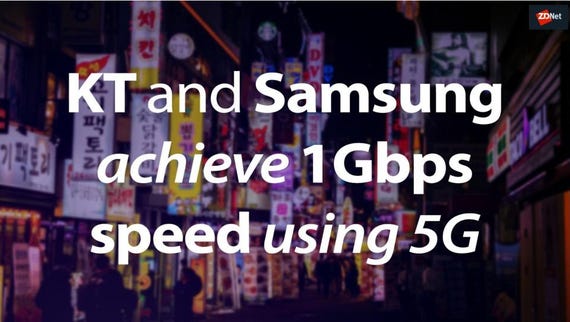 It might be playing on its home turf, but Samsung has claimed it is leading the way in terms of having the largest share of 5G equipment shipped to South Korean telcos.

The company is boasting that it has shipped 53,000 base stations and 5G core solutions since the start of December.

Last week South Korea switched on its 5G network nationwide, in order to claim the "world first" title and beat out Verizon.

Samsung said the size and weight of its 5G base stations allowed for them to be mounted on existing sites with minimal changes.

"The virtualized 5G core solutions, provided to all three Korean operators for their 5G commercial launch, support both legacy 4G networks and next generation 5G services in non-standalone mode," the company said.

"They can also migrate to standalone mode through a simple software upgrade in the future."

At the end of last year, the Korean giant said it would invest $22 billion across 5G and artificial intelligence, and wanted to have 20% of the market by 2020.

Samsung is currently in fifth place behind Huawei, ZTE, Ericsson, and Nokia in network equipment sales.

Concerns over the security of Huawei networking gear, as well as the Chinese giant facing a 10-count indictment alleging the company conspired to steal intellectual property from T-Mobile in the United States, and bans in Australia for ZTE and Huawei have left the door open for Samsung to quickly up its market share.

Turnbull said the ban instituted in August was not done at the behest of another nation or for protectionist reasons, but because it defended Australia's sovereignty and as a "hedge against changing times".

"It is important to remember that a threat is the combination of capability and intent," he said.

Earlier this week, Samsung Electronics said it was expecting a 60% drop in first quarter profit.

Samsung's Science & Technology Foundation announced grants for 44 research projects which include DNA sequencing and silicon sensors for the hearing-impaired.

Samsung Display has begun mass production of the foldable OLED panels that will go into the Galaxy Fold smartphone.

Samsung Electronics expects operating profits of 6.2 trillion won for the first quarter of 2019, a steep 60% drop from a year ago and the South Korean tech giant's lowest in ten quarters.

SK Telecom, KT, and LG Uplus are going all out to lure their first 5G subscribers with the pre-order of Samsung Galaxy S10 5G going on sale on Friday in South Korea.

Join Discussion for: Samsung boasts it is leading the 5G way in...