Samsung Display has begun mass production of the foldable OLED panels that will go into the Galaxy Fold smartphone.
Written by Cho Mu-Hyun, Contributor on April 9, 2019 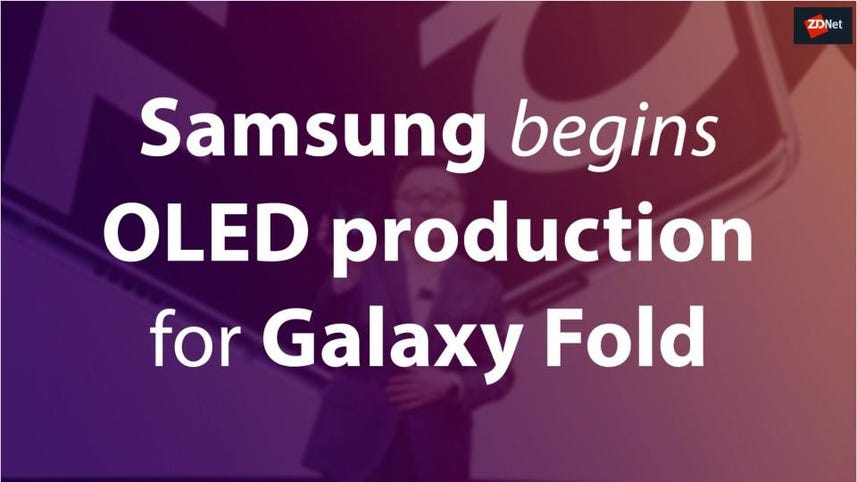 Samsung Display has begun mass production of the foldable OLED panels going into the Galaxy Fold smartphone, the company has announced.

It will be Samsung's first commercial foldable smartphone, with the tech giant expecting to move over a million units of the device.

The foldable display will use new polymer materials that make it 50% thinner than the ones used for conventional displays.

The Galaxy Fold will be 4.6-inches in size when folded and 7.3-inches when spread out.

Samsung Display was the first to market in delivering small-sized OLED panels aimed at smartphones and is also the major supplier for its affiliate Samsung Electronics.

It also supplies its goods to Apple and Chinese vendors, which have all followed Samsung in using OLED panels for their premium smartphones.

Samsung Display was the first to produce flexible OLED panels -- rather than rigid ones -- for smartphones in 2013. The panels have since been used by the South Korean tech giant to provide an edge design and full screen for its smartphones.

Meanwhile, compatriot and archrival LG Display has fallen behind in the small-sized OLED race, but has focused on building its market share in large-sized OLEDs for TVs instead.

Samsung Electronics expects operating profits of 6.2 trillion won for the first quarter of 2019, a steep 60% drop from a year ago and the South Korean tech giant's lowest in ten quarters.