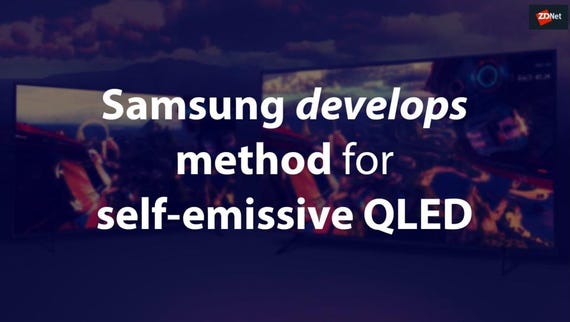 Samsung Electronics has developed a new method to extend the lifetime and efficiency of quantum dot light-emitting diodes (QLEDs) that may lead to their commercialisation, which has been published in the science journal Nature .

A team led by Dr. Eunjoo Jang, a Samsung fellow, and Dr. Yu-Ho Won, a principal researcher at Samsung Advanced Institute of Technology, improved the structure of the quantum dot made out of environmentally-friendly indium phosphide.

Their proposed structure prevents oxidation of the core and builds a symmetrical and thick shell around it to prevent energy leaks. The ligand on the shell surface has also been made shorter to allow it to absorb electric current faster.

Quantum efficiency improves by 21.4% and the lifetime of the diodes increased to a million hours, the South Korean tech giant said.

The company added that it has over 170 patents on element structure in QLEDs and will continue to develop new technology to lead in advanced displays.

A Samsung spokesman declined to comment on when the company will commercialise self-emissive QLED technology.

Despite Samsung's announcement, the commercialisation of displays that uses quantum dot (QD) as the light source is still far away, and may never be realised at all as there are mountain of challenges ahead.

Research into using QD has focused on avoiding cadmium, which is the best material to use as a light source thanks to its malleability and integrity, but is harmful to humans.

Materials such as indium phosphide have so far failed to match the performance of cadmium when used as the direct light source in actual practice.

Samsung's current flagship TVs are called QLED, which does use QD that are cadmium-free. But they do not use QD as the light sources absorbs electricity directly. Rather, QD is used as a film on Liquid Crystal Display that emits luminance by absorbing the light from the backlight.

In October, Samsung Display announced that it will invest $11 billion by 2025 to produce QD Displays.

The production of the first iteration of this will begin in 2021, but will be QD-enabled OLED, which uses organic material as the light source and QD material as a film. It will be more similar to Samsung's own AMOLED used for mobile phones and LG's OLED TVs.

If Samsung's eventual goal is to launch a self-emissive QLED display, at minimum, the industry will have to wait until 2025 to see if it is indeed viable.

Samsung's Tizen-running signage will have QLED technology and supports HDR10 Plus with Knox security.

The deal is estimated to be worth $70 million.

The company reportedly wants to boost smartphone manufacturing capacity in the country.

The aggressive investment plan is Samsung Display's attempt to diversify its portfolio amid slowing smartphone growth and the rise of China, with the company set to begin production of 65-inch QD displays in 2021.

Gamers are the biggest growing force in TVs and Samsung has responded by packing its QLED TVs with gaming focused features, says its head of product strategy.