Available for sale to the public in July, the alcoholic beverage will be concocted in partnership with local brewery Brewerkz using Singapore's recycled drinking water.
Written by Eileen Yu, Contributor on Feb. 24, 2020 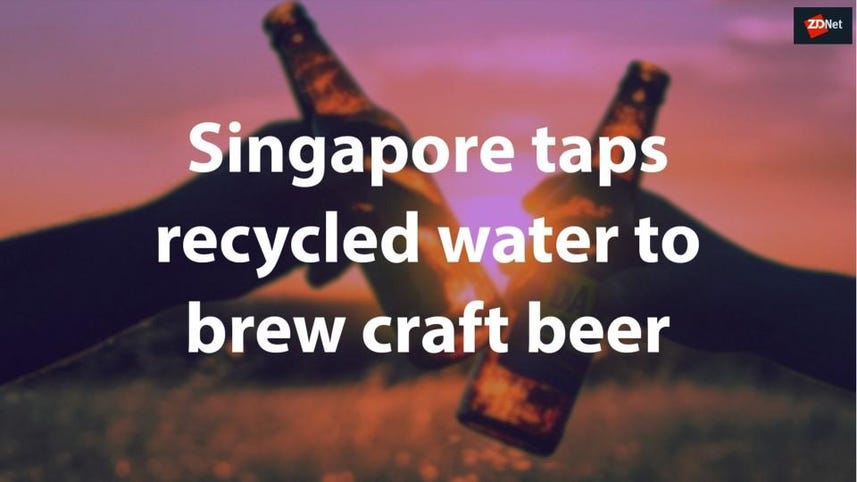 Singapore will be tapping its recycled drinking water to brew a limited quantity of craft beer and making it available for sale to the public. First introduced during the annual Singapore International Water Week show in 2018, the alcoholic beverage will be concocted with local brewery Brewerkz and sold in July when the show is scheduled to take place.

The craft brew would be canned and sold at selected outlets operated by supermarket chain NTUC FairPrice, said national water agency PUB in a statement Tuesday. Made from NEWater, which is treated and purified with advanced membrane technologies and ultraviolet disinfection, the beverage also will be available to visitors at this year's water show--to be held from July 5 to 9--where it first made its debut two years ago.

Some 10,000 litres of the craft beer, dubbed NEWBrew, would be produced for the show, according to PUB. The agency said it would work with Brewerkz to run a contest where home-brewers in Singapore could take a stab at crafting their version of the beer, and the winning entry would eventually be served at Water Week and sold in FairPrice.

Managing direct of the water show Ryan Yuen said: "NEWBrew is part of our efforts to educate Singaporeans on the importance of water recycling and reuse as a strategy to achieve water sustainability. It also reinforces the message that NEWater is perfectly clean and safe for drinking, that can also be used to make beverages like beer."

NEWater was the result of the Singapore government's goal to produce reclaimed water to supplement the country's supply. The first plant was operational in 2000, producing 10,000 cubic metres a day. There currently are five NEWater plants generating up to 40% of local water needs and this figure is expected to increase to 55% by 2060, according to PUB.

Brewerkz's CEO and owner Tan Wee Han said water quality was "critical" to its product as was water that was sustainably produced. Established in 1997, the local business today runs a chain of restaurants as well as a 9,000 feet brewery.

Singapore in 2018 committed SG$30 million in grants to fund technologies and applications that could improve the nation's water treatment processes and operations. With water demand set to double by 2060, PUB then said energy-intensive sources such as NEWater and desalinated water would generate up to 85% of Singapore's water needs by then.

Data centres here run by some vendors, such as Singtel and Equinix, use NEWater as a cooling agent.

In its latest 2020 budget, Singapore also laid out plans to drive the adoption of cleaner and greener transport modes, including measures to fuel the adoption of electric vehicles. In addition, the Land Transport Authority (LTA) will introduce an EV Early Adoption Incentive for the next three years, giving owners of fully electric cars a rebate of 45% off the Additional Registration Fees, not exceeding SG$20,000. The initiative is estimated to slash the upfront cost of owning an electric car by an average 11%, according to the LTA.

Country's water agency has invited the tech industry to pitch for proposals worth S$30 million (US$22.68 million) aimed at enhancing water treatment processes and operations.

Its 'biggest' Singapore investment to date, Singtel says the Tier 3-Plus data center is designed to meet the needs of the financial services and public sectors, as well as cloud and internet service providers.

Spanning 385,000 square feet, the Singapore facility is its largest in Asia-Pacific where there has been increasing demand for cloud services, say company execs.