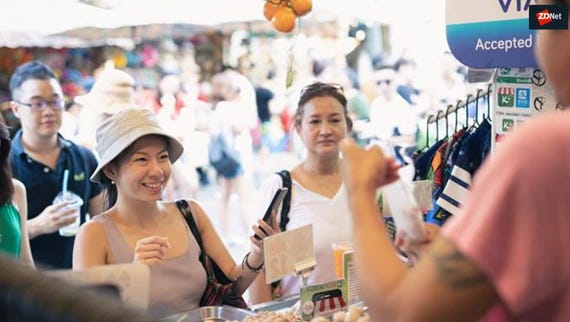 Singapore's largest telecommunications carrier Singtel has announced the launch of Via, the first cross-border mobile payment alliance in Asia in partnership with AIS and Thai digital bank Kasikornbank.

Via combines Singtel Dash with AIS Global Pay and Rabbit Line Pay, enabling QR code-based mobile payments across Singapore and Thailand. The service will later be expanded to the telco's regional companies Airtel in India, Globe in the Philippines, and Telkomsel in Indonesia.

Singtel said it would also expand to include non-telco partners such as China's Ping An eWallet, which is owned by Ping An Insurance Group.

"We see a tremendous opportunity to drive the adoption of mobile payments which supports ASEAN's push towards financial inclusion and vision of a single digital market."

Via will remove cross-border transaction fees, with Singtel saying it already has more than 500,000 Singtel Dash users, while Rabbit Line Pay has over 5 million users in Thailand.

While Singtel in August reported losing 47,000 Singaporean mobile customers over the past year for a total of 4.1 million mobile customers, it has a wide potential customer base for an expanding mobile payments system across Asia, with 735.4 million Singtel Group mobile customers including the 10.2 million on Optus in Australia.

Also experimenting with cross-border payments systems in Asia is SWIFT, which in August announced that it will soon commence testing alongside banks from Australia, Singapore, Thailand, and China.

The trial will use the New Payments Platform (NPP), which uses an email address or phone number to transfer money from one person to another in near real-time, rather than relying on BSBs or account numbers.

Singtel earnings down as group adds another 30 million mobile subs

The Singtel Group had 735.4 million mobile customers as of June 30, despite losing 47,000 mobile subscriptions across Singapore during the past year.

Scheduled to go live by fourth-quarter 2018, the pilot 5G network will facilitate drone and autonomous vehicle trials at the country's designated science and IT hub, One-North.

Singtel and Ericsson have announced reaching peak 4G LTE speeds of 1.5Gbps, with plans to gradually deploy the technology as compatible smartphones become available in 2019.

Singtel's narrowband Internet of Things network, announced last August, has been deployed across the city state.