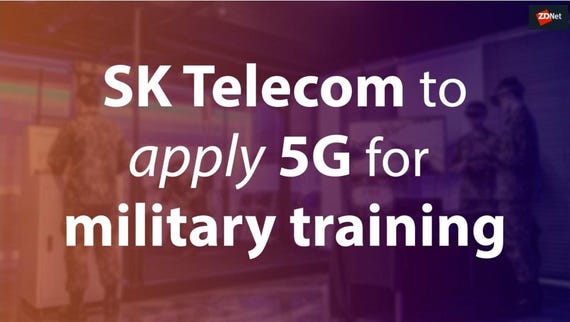 SK Telecom and Korea Military Academy have announced that they are working together to develop 5G-based training programs for military use.

The two will collaborate to create a "smart" academy that combines 5G wireless networks with the latest technology, such as artificial intelligence (AI), virtual reality (VR), augmented reality (AR), the Internet of Things (IoT), cloud, big data, and mobility, they said.

SK Telecom and the academy will also collaborate on research into quantum security and drones.

The mobile carrier aims to complete the build-out of a 5G wireless network at the academy's Seoul campus during the first half of the year. The telco said it will deliver a "customised" network that takes into consideration the security and geography of the military institution.

Once the network is complete, the academy said it will create a VR shooting simulator and VR and AR-based command simulator for trainees. The telco envisions the VR shooting programs to be a military version of the simulations seen in the movie Ready Player One.

5G's low latency and fast speeds would allow classes to host over 200 soldiers-to-be for these programs, SK Telecom said.

Trainees will also get wearable devices so that the academy can use big data and AI to consistently check their conditions.

SK Telecom and KT, Korea's largest and second-largest mobile carriers, respectively, have not used Huawei's equipment for their initial deployment of 5G, while LG Uplus has relied on the Chinese company extensively.

SK Telecom and KT in VR game push for 5G

South Korean mobile carriers SK Telecom and KT seem to believe virtual reality (VR) games will be a big thing for 5G -- and both plan to showcase their offerings at Mobile World Congress.

Seoul and SK Telecom to use 5G to prevent jaywalking

Seoul and SK Telecom's planned intelligent transportation systems will use 5G sensors to warn cars of jaywalkers and pave the way for ambulances, they said.

In partnership with Ericsson and BMW, SK Telecom recently piloted its new 5G network with some impressive results.