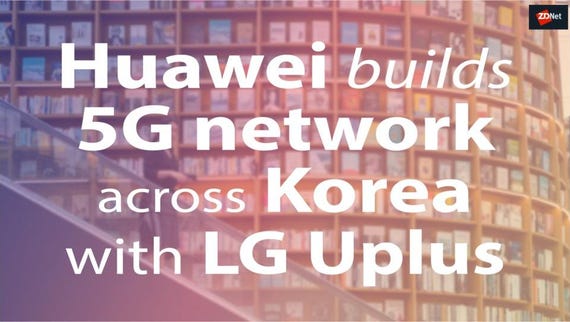 LG Uplus and Huawei are demonstrating the use of ultra-HD video and virtual reality services across the 5G network, which they said will be commercial applications.

Huawei and LG Uplus have been partnered on 5G for several years, with the two completing 5G field trials in Gangnam District back in November 2017 to verify technologies including IPTV 4K video, dual connectivity, and inter-cell handover.

At the time calling it the world's first wide-scale 5G network test using a pre-commercial testing environment, the companies used a 5G "tour bus" to deliver 5G 4K IPTV, and used a VR drone to demonstrate data rates of between 20Mbps and 100Mbps at the LG Uplus headquarters.

Huawei is also demonstrating its 5G capabilities in partnership with Vodafone at MWC 2019, with the two having deployed a live 5G network across Plaza Catalunya, Paseo de Gracia, Balmes, and Universitat in the Barcelona City Center.

However, the Chinese tech giant's 5G solutions has been banned by Australia and the US, limited by New Zealand, and left off the vendor list of South Korea's largest carrier SK Telecom. The US has also taken to warning central European nations and Canada against using Huawei for 5G.

Despite this, the UK is still open to using Huawei; Italy has reportedly denied that it will ban Huawei; and Angela Merkel has set conditions for the company's participation in Germany's new mobile network, including guarantees from the company that it will not hand over information to the Chinese government.