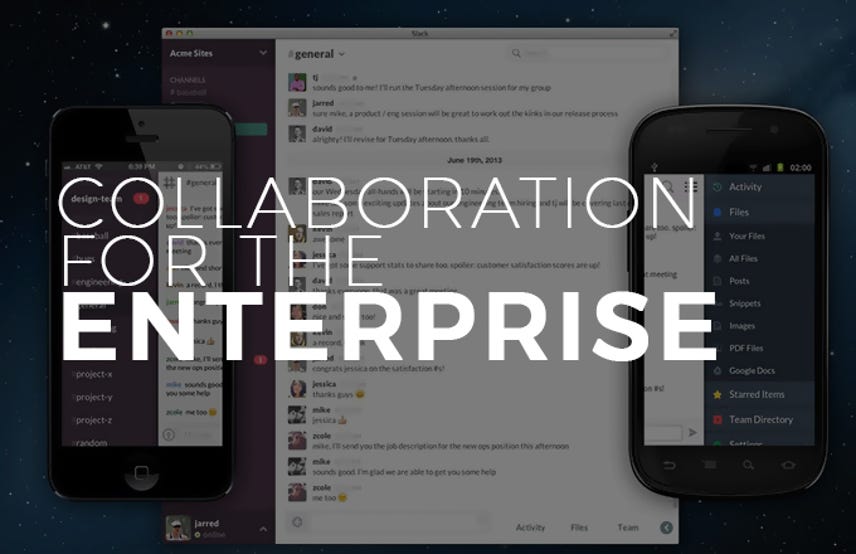 Michael Lopp, VP of engineering, and his associates at Slack are fusing the essential components of hardware and human interaction. Lopp tells ZDNet's Tonya Hall how it's a full-time job managing "the humans." He says, "Day-in and day-out I'm worrying about the people things, keeping the trains on time, making sure that we're building the right product."

Tonya Hall: What's it like to be chased by giants? Hi. I'm Tonya Hall for ZDNet, and joining me is Michael Lopp. He is the VP of Engineering at Slack. Welcome, Michael.

Michael Lopp: Great to be here. Thanks for having me.

Tonya Hall: Okay. We all recognize that Slack is a leading enterprise messaging and collaboration platform. What do you do as your role of VP of Engineering for Slack?

Michael Lopp: Yeah, there's two sort of senior executives here at Slack in engineering. There's myself, the VP of Engineering, and then there's the CTO. And the way they kind of think about those two different roles ... because I get asked this a lot ... is like why are there two folks there? My job is threefold. People, the process, and the product. Cal's job ... Cal Henderson, the CTO ... is sort of, he built the engine, and my job is sort of to run the engine. Day in and day out I'm worrying about the people things, keeping the trains on time, making sure that we're building the right product.

Tonya Hall: Tell us about the origin of Slack and its bottom up development history, how you actually got started and to where you are today.

Michael Lopp: This is my opinion, but I think people who build things, they want to be efficient. They want to get things done quickly because it's really important. Whatever they're building, whether they're engineers or artists or marketing, whatever it is, and I think the reason that we see just a lot of adoption starting at the base of Slack is that it's a fundamentally better way to work.

The humans are used to all of these sort of archaic ways of getting things done, and I'm going to send you an email and wait two days for you to respond. And in a Slack world, everybody's there and they respond quickly, which is just so different than a lot of other work that has been done, so that efficiency piece is the reason we just see teams adopting and even before the companies sign up and using Slack is that the builders want to be efficient.

And suddenly you start to see other groups going, like hey, where is the engineering team or where is this other group? And they're like, oh, they're in Slack. So you see that nice organic growth.

Tonya Hall: Tell us about the evolution of specifically your engineering priorities in the context of the growth of Slack, and especially in this market where now it's more competitive.

Michael Lopp: Yeah. My main job is, sort of like I said at the beginning, is really sort of a care of the humans here, because without those folks here happy and being productive, I have exactly no job. Really, I've been here almost two years now. My job is always about sort of nurturing and encouraging the humans, making sure they have growth plans, making sure it's a culture that is conducive to all of the things that we value here at Slack. It sounds like a lot of words there, but that's an everyday sort of investment, in terms of maintaining and taking care of the culture of the humans.

Tonya Hall: We talk about AI a lot and machine learning and that sort of thing. What role is AI playing in messaging and project management collaboration for Slack?

Michael Lopp: Yeah, it's real exciting because everybody as a team is using Slack and more folks are getting there. They're doing work there. And work is the discussion. It is an artifact, like a Google doc getting posted there. And there's emojis being assigned to a message. And what we can do for individual Slack instances is they can start to learn about what are the important messages. Or in a certain channel, like the Java channel, who are the experts? And that learning just continues to grow as more and more people are putting more information in there, and we can start to mine, and give people insight into what's going on inside of their Slack instance. You can go to any channel right now in the current product, and you bring up the information, and they'll tell you who are the experts in this channel, which is just a great way to start to ... you get value out of all of this knowledge and work and information that's going inside of Slack.

Tonya Hall: Slack has become so big and so good, no doubt due to some of your expert management skills, and I guess that has awakened the giants, if you will. Microsoft now has teams and Google just recently launched Google AI. What is it like competing against two of the biggest names in the software business?

Read also: Inside Amazon's clickworker platform: How half a million people are being paid pennies to train AI

Michael Lopp: I've been doing this for a while. I was at Apple. I was at Netscape a long, long time ago, as well. And I love competition. Competition gives you a real sense of purpose, but the thing that I like about it is it makes you really focus on the things that are important. And when people ask me this question, I point out and say, 'Listen, these other competitors that are great competitors, how many things are they doing? What are their different things, lines of businesses, all the things ... all the plates that they're spinning?' It's a lot and God bless them.

But we're doing one thing. We're making Slack great. We're making this experience of reimagining how work is done. That's the only thing we're focused on, and I think that gives us a really large competitive advantage.

Tonya Hall: Okay. You've written a couple of books on this, including Managing Humans. What attributes will help software engineers become successful in 2018?

Michael Lopp: It's changed so much in the last 20 years. It used to be we boxed software and you bought it at a store. And that world is gone. You're now in a world where you're releasing your software 60-times a day. There's an adaptability that engineers need to just be embracing, and I think probably a better word is actually just curiosity. For me, I'm deathly afraid of becoming irrelevant and everything's changing around you the entire time, and that ability to embrace change, to keep learning from whether that's a Slack thing, or some other piece of technology, it's that ability to be adaptable and curious about how the world's changing as opposed to being scared of it.

Tonya Hall: Well, you've got a lot of great advice, and I'm sure that a lot of engineers would respect and appreciate any advice that you could give them moving forward. If somebody wants to connect with you ... maybe they want to find out more about how to be a successful engineer, how to use AI, and how you've been able to take a software for business and compete against the big giants ... if they wanted to do that, how can they? How can they connect with you, Michael?

Michael Lopp: I have email, although I don't use email much anymore, but I'm on Twitter. I'm with Rands is the name of the guy on Twitter, and also we have a Rands Leadership Slack which you can search for, and it's a great place to hang out with other leaders, either current leaders or aspirational, and have a discussion with each other and learn from each other. That's probably the best way to get in touch with me.

Tonya Hall: All right. Thanks again for joining, and we'll look forward to ... I'll check out your book, Managing Humans. If you want to find me and more of my interviews, you can do that right here on ZDNet or TechRepublic, or find me on Twitter. I like to tweet, and reach out to me there at @TonyaHallRadio, or find me on Facebook by searching for the Tonya Hall Show. Until next time.

Collaboration
How to add a to-do list to Slack