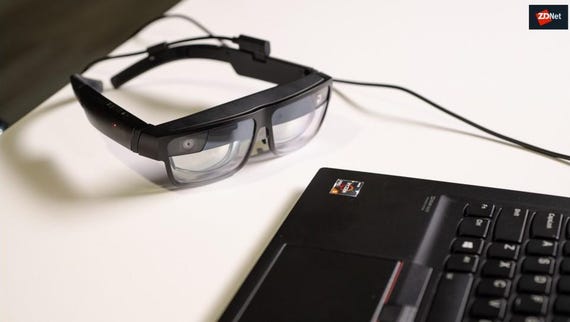 From Google Glass to the Oculus Rift, the headsets required to enable a digital reality experience have created a range of obstacles to adoption. These can include discomfort, the inability to make eye contact while interacting in the real world, battery life challenges, and a host of other issues. There's strong industry consensus that standalone headsets will become smaller and lighter in the coming years, but there are limits to what can be achieved within self-contained devices.

That's why we can expect to see a new breed of smart glasses in the coming years that rely on processing elsewhere such as the PC, smartphone, or computing puck of the kind Magic Leap relied on. Late last month, Qualcomm rolled out a reference design for a new class of smart eyewear. While still conspicuous as opposed to simpler smart glasses not built for XR, such as Amazon's Echo Frames, the new class of devices are designed for comfort during extended wearing sessions. Qualcomm has talked up the idea of a lighter display device acting as essentially a face-worn display for images processed on a smartphone. However, it now argues that, counterintuitively, the glasses' battery life can be extended by adding a bit more processing to the wearables.

A forerunner of this new wave of wearables is Lenovo's ThinkReality A3 smart glasses shown off at its online Tech World event last year. The new offering represents a follow-up from the company's visor-style A6, which took computing capabilities out of the wearable to reduce size and weight. Both fit into a portfolio that includes the Mirage S3 VR headset; Lenovo also partners with Varjo, a headset maker striving for the highest-resolution viewing experience that recently released its third-generation headset.

But the A3 lives on the other end of the spectrum, tapping into one of the sleeper sources of content for augmented reality -- the PC. Lenovo describes how using multiple virtual monitors with zero desk footprint is tailor-made for a time when many knowledge workers must deal with work-from-home setups that may not accommodate such a sprawling expanse of gear. When asked whether the A3 can accommodate work sessions that may stretch on for hours, Lenovo's Mike Lohse responded, "Absolutely. The goal is to make it a comfortable viewing and wearing experience."

Beyond the home, though, in a too-rare crossover between the company's PC and smartphone brands, the smart glasses can also work with the company's Motorola phones. Here, many of the more specialized commercial AR applications, such as hands-free retrieval of repair texts or training or troubleshooting via remote experts, drive usage; Lenovo says that these ROI-driven applications have driven XR adoption as opposed to more horizontal apps aimed at virtual conference room-style collaboration.

Lenovo has partnered with Swiss company Holo-One to integrate out-of-the-box options for remote experts, workflow, and visualization. Qualcomm has also developed a framework for Android that allows apps to open in virtual windows on such smart viewers. Using the phone's screen, technicians can perform advanced interactions like rotating a 3D model in space, but it's a far leap from the kind of manipulation that the HoloLens' excellent hand-tracking enables.

Today, the ThinkReality A3 connects its host devices via cable; Qualcomm sees this eventually migrating to Wi-Fi and (naturally, given the company's core business) 5G. Left in the shadows? 802.11ax and ay, the Wi-Fi high-speed wireless standards for which the idea of a distributed augmented reality device pair seems an ideal application. While Qualcomm says we may see the 60GHz deployed in some high-end PC-based applications, though, it says that the bandwidth demands are not strenuous enough to demand WiGig. Furthermore, one can foresee applications that might require that the host device not have a line of sight to the glasses, causing challenges for the also-ran standard. More practically, with Wi-Fi 6e support expected to roll out broadly to PCs and smartphones in the coming years, the installed base of the 6GHz Wi-Fi standard is too much of a market force to ignore.

For pros and consumers, VR makes price-performance leaps
Following the improved graphics at a $100 price cut of the Oculus Quest 2 consumer headset, Varjo is reding the price of its latest pro headset generation by $1,000 as it claims leadership in resolution and field of view.

Epson launches BT-40, BT-40S AR headsets
The BT-40 is seen as a wearable display that can used as a secondary screen to go with USB-C devices such as smartphones, tablets and laptops.