Smartphone adoption is growing among Brazilian children, with 83 percent of users aged between 0-12 having access to someone else's device or their own, according to research.

The desire for a smartphone starts at an early age, the report by Panorama Mobile Time - Opinion Box has found. Some 40 percent of the participants polled have reported that children aged between 0-3 years old have asked their parents to buy them a smartphone.

According to the 2018 edition of the study, 23 percent of children aged between 4-6 years old owned a device. The latest edition of the report suggests that has jumped to 30 percent. 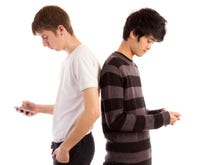 Your children are slaves to their smartphones Today's teens and pre-teens are overly reliant on technology, lazy, self-entitled, and are the worst read of any generation.

The number of children who have no access to smartphones at all has dropped from 16 percent in 2018 to 10 percent in 2019, the study noted.

Time spent using smartphones is another area covered by the research, which suggests 32 percent of Brazilian children aged between 10-12 years old spend 4 hours or more using the devices.

Parents are uncomfortable about businesses targeting their children with advertising through mobile apps, according to the study, which covered 1580 Brazilian parents to children aged between 0-12 years old.

Some 67 percent of the parents surveyed are unhappy about targeted ads that accompany content their kids consume and 94 percent prefer to download content and tools that have no ads - but only 26 percent are happy to pay for ad-free tools.

On the other hand, 47 percent of the Brazilian parents polled admitted to having purchased products or services seen by their children in mobile advertising.

The Mobile Time research follows an investigation by the Brazilian Ministry of Justice over the potential collection of data belonging to children and teenagers for the purposes of targeted advertising.