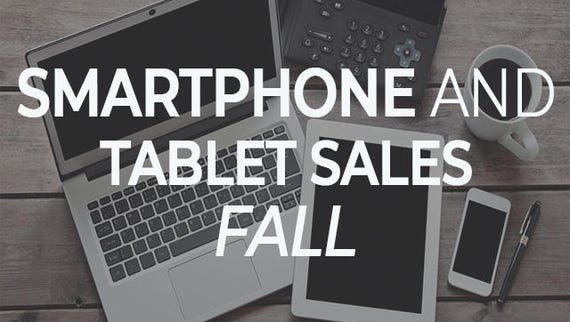 But despite the lull, Strategy Analytics believes the tablet market shows signs of recovery.

"The tablet market may be on the road to recovery as several major vendors have strengthened their hand in 2018, cannibalising market share from weaker players and forcing some to consolidate or leave the market entirely," Connected Computing director Eric Smith said.

With 1.4 billion smartphones shipped in 2018, 60.6 million less than in 2017, IDC said the likelihood of a continued declining market this year is becoming more of a reality.

"Globally the smartphone market is a mess right now," said Ryan Reith, program vice president with IDC's Worldwide Mobile Device Trackers. "Outside of a handful of high-growth markets like India, Indonesia, Korea, and Vietnam, we did not see a lot of positive activity in 2018."

According to IDC, lengthened replacement cycles, increasing penetration levels in large markets, as well as political and economic uncertainty contributed to a fifth consecutive quarter of smartphone shipments declining.

Shipments of Apple tablets increased during the three-month period, with the iPad maker sending 14.5 million units across the globe. In the same period a year prior, Apple shipped 13.2 million.

iOS was the only operating system to experience growth, the report showed. Android still retained its number one spot, losing market share from 62.3 percent in 2017 to 60.2 percent in 2018.

"Apple is attempting to remake the computing market with more mobile iPad Pros for productivity while offering lower priced iPad slates for entertainment," Smith continued. "The slate market is particularly sensitive to price and the Android segment is dominated by slate models."

On the smartphone front, Huawei, Xiaomi, and Oppo all increased their market share in 2018.

Despite the current spotlight on Huawei, the Chinese giant shipped 51.8 million more smartphones last year than it did in 2017.

Huawei shipped 60.5 million smartphones in the last three months of the year.

Smartphones: Is there any innovation left in this market?

In this fascinating video roundtable, ZDNet's David Gewirtz, Jason Perlow, and Adrian Kingsley-Hughes sit down to discuss the future of the smartphone. It's not what you may think.

The best tablets for 2018: Our top picks

Laptop makers question the keyboard in an all-glass world
Makers of larger mobile devices are experimenting beyond iPad-like tablets to achieve benefits that the smartphone gained by leaving the keyboard behind.

This comprehensive guide covers plans from leading smartphone vendors as the industry begins wide deployment of 5G mobile networks and devices that leverage them.

Join Discussion for: Smartphone market 'a mess' but annual tablet...