Snowflake said it will begin supporting Python in its Snowpark developer framework.

With the move, Snowflake, a data cloud vendor, will widen its appeal with data scientists, data engineers and developers since Python will run natively on the company's platform. Snowflake announced the Python support at its Snowday event.

Python is among the most popular programming languages and just topped Java on the rankings.

Snowpark for Python will enable developers to collaborate on data, optimize pipelines, applications and machine learning workflows on the Snowflake platform. Snowflake for Python is in private preview.

According to Snowflake, Snowpark already supports Java and Scala, and the addition of Python is likely to attract more developers. Snowflake recently announced a partnership with Anaconda and launched Snowpark Accelerator Program with pre-built partner integrations.

Christian Kleinerman, senior vice president of product at Snowflake, said the move toward Python was about meeting developers where they are. "We want to meet customers where they are and give them choice of language," he said. "Let them use the tool of choice."

According to Kleinerman, Python with the proper security and governance will be a differentiator for Snowflake's platform. Rich libraries should also speed up the machine learning pipelines, he added. 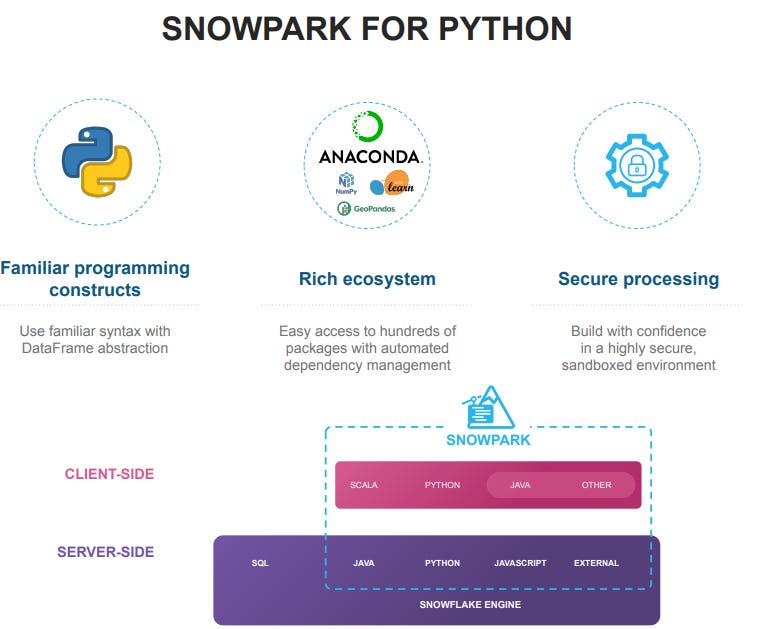 John Damalas, CTO for Pacific Life, said the Python support from Snowflake is big for the company's developers. Damalas said Python support will improve data preparation and workflows. "It really unlocks a lot of additional capability," said Damalas. "It's not just the language but the entire Python ecosystem that is now available or will be available within Snowpark.

Snowflake also rolled out a series of other platform updates including:

Those aforementioned updates are in private preview.

Snowflake added that it has increased the number of data providers in its Data Marketplace and now tops more than 200.