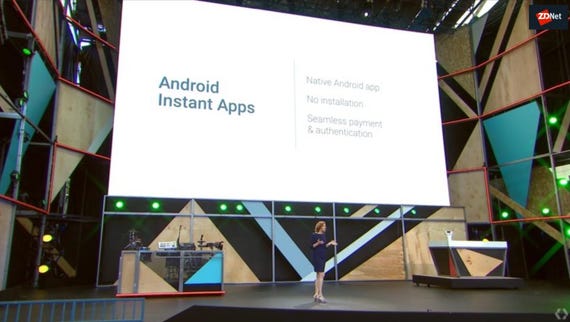 Does your company even need Android apps now thanks to Instant Apps?

Reader Ron sent me an email recently. He asks, "I know you have a million people ask you this, and every one that asks is sure they have the next best thing. I'm a simple non-tech guy, and I have an idea that should have already been on every phone made. I don't have a lot of money, I'm an ex-Marine who now works in law enforcement, but I'm sure if the app is made, Apple and Android both will want to make it part of the standard features of the phone."

Whoa, there Tiger! Let's take a step back for a minute.

I do get this question. A lot. Ron is writing in response to my article, True confessions of a former iPhone developer. I published that bad boy back in 2012 and it detailed some of my experiences as a very lazy iPhone developer.

Just to summarize: I spent all of a month doing development, I got into the app store about 35 days into its existence, I wrote forty very silly apps, I did absolutely no marketing (at all), and made about $7K over the life of the products.

While I've been a product producer for decades, I was a very low-key app developer. I didn't find it all that much fun, and it was a side project to get to know apps just as apps were becoming a "thing".

In any case, the app market is different now. When I launched my apps, there were 25,000 apps total. And that was a LOT. Now, there are somewhere over 1.2 million in each of the Apple and Google Play stores. That's a lot of competition.

Those numbers also raise the specter of something called a "discoverability challenge." In other words, how will people find your app? Notice I haven't even talked about whether doing an app is economically viable, or whether lack of technical skills is an issue. I'm just asking a basic question: how will users find this thing?

Here's a hint. If your answer is something like, "My idea is so great, it will just be found by itself," you better have an Instagram up your sleeve. Anything less (and even another Instagram) doesn't stand a chance.

Let's talk about the app business for a moment. First, let's acknowledge that it is a business. Business requires a set of skills, from design and product to support, planning, money management, and so forth. While it's certainly possible to be a lone wolf independent developer, that requires even more skills, because every task is on your shoulders. 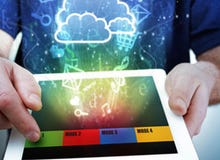 How to break into the mobile app business with little cash and no programming skill Think you can make a bajillion dollars creating an app? David Gewirtz shows you how to get started. He doesn't guarantee you'll make any money, but with this step-by-step guide, at least you'll know where to begin.

Next, let's look at the potential for success. There is money out there. Millions and billions of dollars. Consumers are buying apps like crazy. But it's a complete crap shoot as to whether your app will win. I'll tell you this: if you have a name like Kim Kardashian, you have a much better chance of making bank than if your name is Ron or Dave.

Independent developers have had it rough of late. Jared Sinclair, who created a sweet RSS reader app called Unread, detailed all the work he did and his eventual income: about $40,000 for a year's work. That might seem like a lot, but a programmer with a salary can routinely double that income, and that comes with extra goodies like health insurance and vacation. Marco Arment, pretty well known as the creator of the Instapaper app, talks about app sustainability and what he calls app rot. He also cites other app developers who are also finding it a tough road.

My experience was unpleasant. I've introduced probably 100 or more software products over my career, so I know of software product marketing. The app store experience was just a circus. By the time I pulled my silly DaysTo Christmas app off of the Apple app store, there were sixteen identical clones, including one jerk who copied our description word-for-word. Despite complaints to Apple, they have yet to kick that creep off the app store.

I'm not complaining because my feelings are hurt. I wasn't in the app store game to make a living. It was a side thing for me. But if you are in the app business to make a living, you need to understand that this isn't necessarily a path to easy money.

Now, let's move on to some of the more worrisome aspects of Ron's comments in his email to me. Ron has an idea, and he says he's, "a simple non-tech guy." This implies to me that he has no intention of writing his own app.

Okay, so, uh, where does the app come from?

I'm being a little sarcastic here, but I've seen this one a lot. Someone has an idea and magically thinks either (a) the nearest techie will just write it up for free in return for a share of the eventual riches, or (b) it's a good idea to job the project out to a foreign developer, or (c) he has a friend with a cousin who's a consultant and that dude says he can build it for $800. Yada yada yada. I'm sure that every technical professional has heard some variation on this theme over the years.

Here's a simple piece of advice: if you can't write your app yourself, typing it on your own computer, doing the work yourself, with your own brains and skills, don't do it.

Now, of course, if you're a serial entrepreneur, you have money to burn and you have experience putting together a business plan and a programming team, you can probably disregard my previous advice. But if you're just a guy with an idea, a non-techie, with, as Ron describes it, not "a lot of money," then run.

Run as fast and far as you can.

Finally, Ron said he thought his idea would make a great standard feature on iPhones and Android devices. We've all had those ideas. But let's give Ron the benefit of the doubt and say he's come up with something revolutionary. How do you present it to the big boys?

This is not an easy answer, because the showing part is easy. The keeping something from that showing is not. At this point you dive into the issue of intellectual property. Most companies won't even look at something if they think you might later take legal action claiming their work as your own.

One approach is to patent your idea, but there are serious challenges. Patents take a long time, they are ungodly expensive (all legal fees, and most of that a waste), and software patents are hard to protect anyway.

The way I look at the intellectual property, you want to sell your idea to the big boys is this: they have millions of users. You're not the first with the idea. It's probably been suggested hundreds of times. Unless you can turn it into a piece of software or hardware on your own (and there is always Kickstarter), or you've been in the business doing and you know all the players, road bumps and potholes, don't expect to license something to Apple or Google.

But David, what about the dream? What right do you have to squash some nice man's dream?

While writing great code takes some good solid education, almost anyone can start out and write some simple apps. It's not that difficult. There are a ton of training programs out there, there are some free programs on iTunes U, there are some inexpensive classes (like Lynda.com), and mucho advice on YouTube. Google has a great "Building your first Android app" tutorial.

These are all very inexpensive (or free) and can get you started with the basics of app development.

Let me be clear. I completely encourage anyone to go off and learn to develop their own apps. That's a great idea and a good investment. Where I'm coming down hard is if you're trying to get an app done by someone else. Hands on programming is the very best choice here and learning to code is a very useful and healthy life skill.

So, let me help you by giving you a decision tree. So you have an app idea and want to make a bajillion bucks:

I've been in the software business for a very long time. Heed my words of advice.

Join Discussion for: So you have an app idea and want to make...