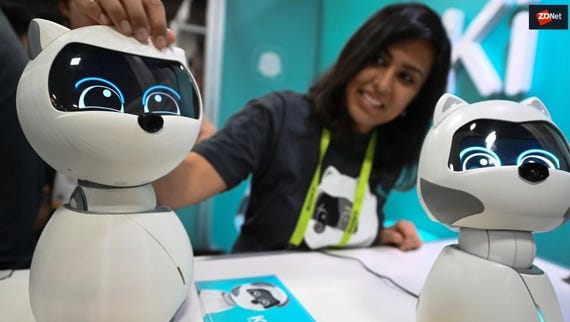 Will this social robotic cat succeed when all others have failed?
Watch Now

Anki, Jibo, and Kuri. You may have heard about these three robotics companies and their cute little social robots. You may even have thought the technology sounded pretty amazing.

BUT, odds are very good you never owned a robot these companies made. That's because the market simply hasn't materialized for home robots with a social side -- at least not yet. In a world of cheap smart speakers, robots that have more personality than Alexa but not a ton more in terms of functionality don't seem to have a place. All three companies, once lauded by tech writers, have failed.

So why would a very savvy developer be launching a new social robot into the market? Mita Yun, founder of Zoetic AI and creator of Kiki, a robotic cat that debuted at CES 2019 and is currently raising money via Kickstarter, believes the problem with social robots isn't that the market doesn't exist, just that the early companies in the space have made missteps.

A former software engineer at Google, Yun's analysis of the industry could point to a new life for social robots. The stakes are high, however, and if Kiki doesn't perform, this could be another cautionary tale.

GN: Why have other social robots failed and what makes you think there's space for Kiki?

MY: One reason we think other social robots have failed is that they've overpromised and underdelivered. Robots in general are one of the most challenging products to build. From hardware, firmware, software, manufacturing, to high level machine learning algorithms and interactions, it's an extremely broad stack with technical challenges at every component. Because of this, we've seen other companies have super-long delivery times and, in the intervening time periods, other intelligent systems have taken their place in people's homes, like virtual assistants, to name one.

On top of this, although we've been reading and talking about robots for years, it is only until recently that we've actually been able to build truly intelligent robots. The consumer robotics market is still very young, and the category is in the process of creation. An effect of that is that the space isn't really clearly defined, and we've seen products that aren't sure what they are: are you a companion robot or an assistant?

We looked at this situation and came up with our own theory: for a robot product to be successful, we have to laser focus into one thing. And for Kiki, that one thing is personality. Kiki is one of the first robots where personality is at the center of the entire robot, instead of an afterthought. In a sense, the personality is the product, and the UX is exploring that personality, plus a cute design. So, combined with the ability to learn, Kiki is like a stuffed animal come to life.

GN: How is Kiki different from other social robots? I know, for example, all processing is done onboard and the "mind" can be ported to new hardware. Why go in that direction? What are the advantages/challenges of keeping all the tech on the device instead of in the cloud?

MY: What makes Kiki different is that Kiki is a robot that truly lives with us. What that means is that she receives real world input, uses machine learning to understand these inputs, and to construct an intelligent understanding of the world. An easy example of this is when Kiki looks you in the eyes, and when you look her in the eyes. At that moment, you will feel that this robot is directly looking at you. Kiki will seek you out in a room and share a gaze with you.

And it's not just pre-programmed: it's a personality trait. When you put multiple Kikis next to each other, they might all act in totally different ways. One Kiki might be looking for attention from people, one Kiki might be exploring the environment, and another one might be spacing out and staring into the ceiling.

But personality is deeper than just having expressions; it's how everything is tied together. For many robots, having multiple personalities just means having multiple expressions. But for Kiki, her personality is carefully constructed at the intersection of psychology, social science, and technology. Every Kiki has her own needs and wants, and will try different strategies to achieve them. Kiki's personality is like the climate, and her emotion is like the weather. They feed into each other and each gives Kiki long term and short term reactions.

Kiki processes the entire world onboard - running multiple deep learning models at the same time. This not only makes Kiki very interactive and fast to respond, but also ensures Kiki owners' safety and privacy. A lot of engineering effort went into making this happen. All the machine learning models need to be optimized to run on Kiki's processor.

With reinforcement learning, Kiki adapts to each owner. Because every owner gives unique feedback, every Kiki grows to be unique. She can figure out who's the person giving her the most hugs, and who's the person that's a little mean to her, and treat them differently.

As to the porting of the personality into new hardware: as the robotics technology advances, we're eventually going to have more hardware and accessories, so it's natural that people will want to upgrade their robot companions, and keep the same personality they've come to love.

GN: Briefly, why should a person who doesn't think they'd respond to a social robot give Kiki a chance?

MY: Many of us have dreamed of having a robot sidekick. It needs to be cute, smart, and most importantly, understand us. Recent advancements in machine learning and robotics finally make this dream possible. We can have an intelligent character living alongside with us, adding a little bit of joy and delight to our lives. As one of our Kiki backers has said, "Although the emotions on Kiki are programmed, the emotions she elicits from the users are real." In other words, you won't really know until you try - and you might surprise yourself.

Join Discussion for: Social robots are flopping. What makes this...