First things first. I am British and live in England. I have no political leanings either way towards either the Republican or Democrat party. I can not vote in the US presidential elections.

I have been watching the US presidential debates with interest, primarily to look at the data spikes and increases in traffic across social media and traditional sites during each debate.

I wanted to see data that shows how, when, and where people are engaging with the debate. This traffic might have come from streaming online or by spikes in social media postings.

Content delivery network Fastly, works with news outlets and social media companies to make sure its content stays up and gets delivered -- especially when traffic is heavy.

It wanted to see where around the country people are most engaged in the debate, from streaming online to social media. It looked at spikes on social media during controversial or heated moments in the debate and overall traffic patterns for online streaming.

It focused mainly on data from the first debate and collected stats from the second debate.

Fastly also saw a spike of up to 3000 percent to media sites fact checkers when Hillary Clinton referenced her own website and its fact checkers.

It noted that the biggest three social media moments overall, in terms of traffic were; a 22 percent increase in traffic when Trump claimed he "did not say" climate change is a Chinese hoax.

During the first debate, traffic to the hillaryclinton.com site surged during the debate, spiking most notably when she first viewers first directed viewers to fact check in real-time on her website. This generated an increase in traffic to the site of 4,600 percent.

Traffic to the site increased by 300 percent at the start of the discussion around racial healing, and increased 300 percent again when Trump mentioned that Clinton "chose to stay home" and she responded that she had prepared for the debate and "to be president".

During the second debate, things changed quite a lot.

There was an eight percent decrease in traffic during the second debate whereas new media social traffic had a three percent increase.

There were however, large spikes to sites with fact checkers using traditional media. At 9:08 pm EST Clinton answered the very first question about education funding and reform.

This generated a 250 percent spike in traffic. The spikes during the second debate were smaller than during the first debate.

At 9:27 pm EST Trump said he would get a special prosecutor to investigate Clinton. This generated a 100 percent spike in traffic.

There was a 256 percent spike in traffic at at 10:07 pm EST. At this time Trump denigrated Clinton's tax reform efforts in the Senate, and said he understands the tax code better than anyone.

After the debate, at 9:48 pm EST there was a 500 percent spike in traffic as people went to check information heard during the debate.

Fastly said that it did not see any large spikes with new media during the second debate, but suspected that people were using new media throughout the debate.

Fact checkers and online dictionary Merriam Webster noticed huge jumps in traffic as people went to check details about what the candidates said. The online dictionary noticed a huge spike in people searching for 'Lepo' instead of the Syrian town Aleppo.

So who will win? Traffic during the second debate decreased. Perhaps people made up their minds, checked their facts, and made their comment public during the first debate.

Or perhaps voter apathy has meant that the comments made during each debate will not do any difference to their decision. Whichever side wins, things that matter to voters may not actually change at all. 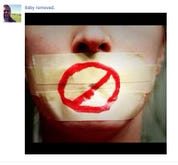