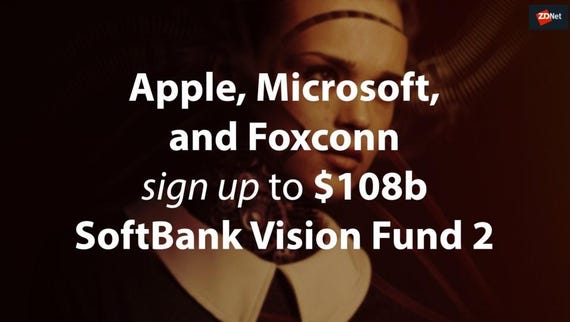 Apple, Microsoft, and Foxconn sign up to $108b SoftBank Vision Fund 2
Watch Now

SoftBank intends to sell 5% of its telecommunications arm to contribute to the cash flow required to faclitate a massive stock buyback program.

The company said this week that 240 million shares in the carrier, the third-largest in Japan, will be sold off as part of a ¥4.5 trillion yen ($41 billion) buyback program, announced in March, that has been designed to bolster the value of SoftBank shares.

However, as reported by Reuters, the exact price of the telco shares has not yet been finalized. If 5% are sold, this will leave SoftBank Group with a 62.1% stake.

SoftBank plans to repurchase roughly $18 billion in common stock and use the rest of the funds for loan collateral, redemptions, bond buybacks, and cash flow improvements.

Earlier this week, the Wall Street Journal reported that SoftBank is also holding talks with Deutsche Telekom AG to sell a "significant" part of the stake the company owns in T-Mobile US.

SoftBank acquired approximately 25% of the carrier due to previous investment in Sprint.

The company has been in a precarious financial position for some time due to failed investments made through the Vision Fund arm including a disastrous investment in WeWork which contributed to the loss of operating profits in Q3. The COVID-19 pandemic has also caused major business disruption.

SoftBank recently withdrew a $3 billion tender offer to WeWork, citing a failure to secure closing conditions by the office space leasing startup -- as well as "multiple, new, and significant pending criminal and civil investigations" that surfaced after the original deal was agreed upon.

CNET: iPhone's Face ID now unlocks faster when you wear a face mask. Here's what to do

The co-founder and former CEO of WeWork, Adam Neumann, was due to be one of the main beneficiaries of the tender offer and has since filed a lawsuit against SoftBank claiming the company has "breached contractual commitments and fiduciary duties" by withdrawing the offer.

This week, SoftBank posted an operating loss of ¥1.36 trillion ($12.7 billion) for the fiscal year ending March 31. While sales have increased by 1.5%, the Vision Fund alone accounted for a ¥1.93 trillion loss over the year, while the WeWork debacle contributed a loss of ¥720.8 billion.

The Vision Fund has been hit by underperforming or failed investments, as well as the novel coronavirus, which has caused severe economic damage worldwide. SoftBank founder and CEO Masayoshi Son has previously said that he expects 15 companies in the fund to fail or go bankrupt.

TechRepublic: The top free online tech classes to advance your IT skills

Despite the troubles caused by the Vision Fund, SoftBank's telco arm is still a stable business, earning ¥4.86 trillion in revenue over 2019, an increase of 4% year-on-year.

On Wednesday, SoftBank announced the creation of a joint venture with Mapbox, dubbed Mapbox Japan, which will use Mapbox's location data platform and mapping services to create new services for Japanese developers. The companies added that organizations offering COVID-19 mapping services could expect "special" support by the JV in the future.

Join Discussion for: SoftBank reveals plans to sell 5% of telco...