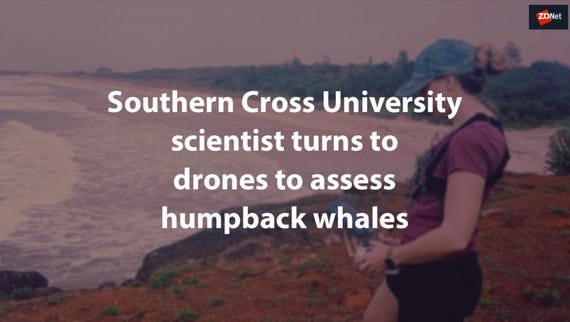 A Southern Cross University PhD candidate Grace Russell is turning to drones to help measure the size and assess the body conditions of humpback whales along Australia's east and west coast.

The drones will be used to capture vertical images of the whales from above. The images would be used to take measurements of the different classes of whales, such as juveniles, adults, pregnant whales, lactating whales, and calves.

The photographs would then be used to make a number of comparisons, she explained, including examining the relationship between the whales' body condition and the migration time between the west and east coast whale populations, and how the different classes of whales differ between northward and southward migrations.

"I'm hypothesising that there will be a different relationship between body condition and migration timing between the west and east coast populations," she said.

Assessing a whale's body condition would also be another way to monitor the health of each whale and the population level, which could potentially provide an understanding of a whale's foraging success and the relationship between reproduction and migration, she added.

"Improving our understanding of body condition in free-living whales can lead to improved knowledge on reproductive capacity, population health and viability, and understanding responses to environmental and anthropogenic changes. Despite its importance, little information is available on the relationship between humpback migration and body condition," Russell said.

Russell plans to start the first phase of her research on the east coast in early June.

Speeding up the delivery of vaccines by hours, if not days.

UPS on Wednesday announced a series of new initiatives and partnerships, all aimed at upgrading its global logistics network

Time is running out, with half of the reef's coral already dead.