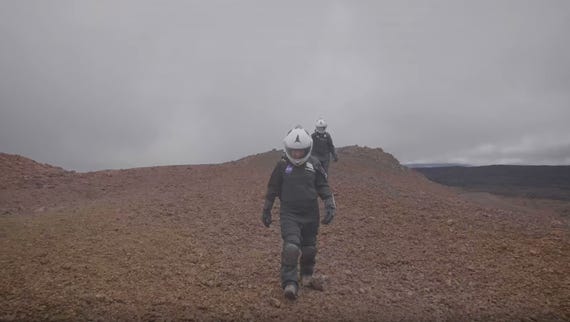 It's just over 50 years since the the Apollo 11 mission first landed humans on the moon, and (finally) the world's space agencies are now setting their sights on a new, ambitious target. It's quite possible that the next generation of astronauts may include the first person to set foot on Mars.

But if that's going to be the case, there's plenty of work to do yet. Successfully landing on Mars will mean overcoming a whole new set of challenges.

"We are not born to live in space – for us, space is still a hostile environment," says Tommaso Ghidini, head of the structures, mechanisms and materials division at the European Space Agency (ESA).

While it took days to the reach the moon, it's months or even years for the red planet. A zero gravity environment, loneliness and isolation, and a dangerous environment beyond the reach of traditional medical care all add up to make the journey to Mars one filled with risk.

For starters, astronauts on their way to Mars will need to deal with the higher levels of radiation that come with a journey outside the Earth's atmosphere and magnetic field. According to the ESA's ExoMars Trace Gas Orbiter, one single journey to Mars could see astronauts racking up 60% of the total radiation they should be exposed to in their entire lives – much more than their counterparts on the International Space Station, and several hundred times more than a human back on Earth would face in the same period. Increased radiation exposure is linked to a number of cancers, particularly leukaemia, so future Mars missions will need to develop new ways to cut the levels of carcinogens that astronauts are subjected to.

The solution, according to Ghidini, is some elegant engineering. Hydrogen-containing substances are proven to be good at protecting against radiation, which would mean water could be used as a protective layer within Mars-bound spacecraft. But water is both heavy and bulky, and very expensive to transport into space.

So the ESA is planning to use the fluids that are already onboard – like drinking water for the astronauts or propellants – and store them around areas where the astronauts sleep to give them the best radiation for the longest time. "That way, the water that you have to bring anyway is doing another noble function – protecting the astronauts," Ghidini says.

Water-lined space suits, with fluids concentrated around blood-producing areas of the body, which are already being tested on the ISS, would also be deployed to reduce radiation exposure.

A prolonged lack of gravity, both in space and on Mars, is another problem. As new bone forms along lines of stress; regular weight bearing exercise (even if it's just carrying your own body weight) is needed to stop bone withering away. As space is close to a zero G environment, astronauts experience little stress on their bones, and so fall victim to osteoporosis, a condition where bones can thin and fracture more easily.

While osteoporosis is a common condition on Earth, the near zero G environment in space could cause a new problem for astronauts' bones: they may be at risk of shattering, rather than fracturing as they might here on Earth. Astronauts will need to have a way of replacing any bone that may beyond repair.

The answer, says Ghidini, could lie in 3D bioprinting, where human skin, bones, and even organs could be printed on-demand in spacecraft or on the planet's surface.

Having on-demand replacement bones and organs available to Mars astronauts is one thing, but having the skills onboard the spacecraft when you need them to do the surgery is another.

"Once you have started the mission, you cannot abort it – you can't come back if you have a medical issue. You have to be able to heal the astronaut," Ghidini says.

Using robotic surgery equipment remotely operated by Earth-bound surgeons would seem like the ideal solution to onboard medical emergencies, but there's a 40-minute lag between a communication from Earth reaching Mars due to the distances involved – not the near real-time link that telemedicine would need.

Instead, one of the Mars crew would need to be the designated surgeon. If an emergency did strike, medical experts on earth could build a simulation of the astronaut-patient, which could be used by the astronaut-surgeon to practice on via an augmented reality (AR) headset, until they felt skilled enough to undertake the real surgery. The ISS has already tested the use of AR to help walk astronauts through new projects.

But the health problems that could dog a Mars mission would not only be physical: trapped in a small box floating through empty space with the same handful people for years would put a strain on anyone.

Keeping astronauts in good mental health is another priority for the ESA's researchers. The International Space Station is already seeing the first fruits of its work into mental health in the shape of an AI-equipped robot known as CIMON. It could eventually be used to help monitor and improve an astronaut's mood.

Keeping astronauts entertained is another way of helping their mental health hold up. Food, according to Ghidini, will be one source of distraction for the space travellers.

"We need to have, from an eating perspective, something that is more like an event – it's more social, it's even cultural. It's something where you stay together, you use your creativity, and you relax," he says.

That means cooking. Astronauts could be able to use 3D printing used to create meals with a sense of occasion, a break from a non-stop diet of pouches of dehydrated food. Ghidini's team has already 3D printed a pizza to show how on-demand food could help break the monotony of space dining.

Technologies developed as part of the race for space have now become commonplace: the CT scanner that was developed to test the structural integrity of materials used in the shuttle is now found in hospitals worldwide, while filters developed to recycle astronauts' urine inspired the filters used around the world to purify contaminated or unclean water.

Ghidini hopes that technology created for future Mars missions will eventually be used to improve the conditions for people here. And those next-generation technologies will have to be greener, too.

"We want to go to Mars in a respectful manner, and avoid the mistakes we have done on Earth. We want to go and do recycling on a massive scale – that's the way you do a mission like that, there is no other way. You have to recycle all the equipment, you have to use the resources you find in situ, and that is another lesson we need to bring back to Earth," Ghidini says.

"We are going to Mars because, first of all, we want to protect the Earth much better. Mars was an Earth before, and then it aged incredibly fast – we don't know why – and became what it is today, a cold desert with a mainly CO2 atmosphere. We want to understand what happened to Mars in order to avoid that it happens on Earth."

Join Discussion for: Space medicine: The technology that will...