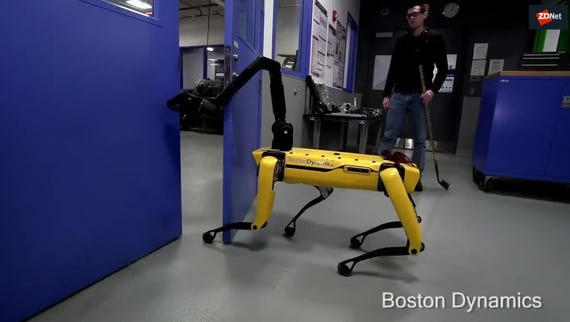 Boston Dynamics revealed in September that its dog-like Spot robotic quadruped was already being used in tests to monitor construction sites, inspect gas, oil and power facilities, and in public-safety scenarios.

But it turns out one of the first organization to have tested Spot is the Massachusetts State Police (MSP), which struck an agreement in July to temporarily lease Spot for 90 days between August and November.

As per the agreement, MSP's bomb squad wanted to evaluate Spot in "law-enforcement applications, particularly remote inspection of potentially dangerous environments which may contain suspects and ordinances".

The loan of Spot was uncovered by the American Civil Liberties Union (ACLU) of Massachusetts, which filed a public records request shortly after discovering a Facebook post by the Massachusetts State Police about an event on July 30 where it would explore the use of robotics in law-enforcement operations.

An MSP spokesperson told WBUR that Spot was used as a "mobile remote observation device" that provided police with images of suspicious devices or potentially dangerous situations, such as where an armed suspect might be hiding.

Spot has a 360-degree camera, crash protection, and can work tough environments. It has a top speed of 3mph and can carry a payload of 14kg, or 31lb.

When Boston Dynamics started selling Spot this September, it offered testing partners access to the Spot software development kit (SDK), which allows customers to create their own applications and control "command poses and velocities, configure payloads, and access robot perception and payload data".

How customers choose to use technology has become a contentious issue among employees at tech giants. For example, Google employees opposed the company's work on the Pentagon's Project Maven.

Boston Dynamics vice president for business development Michael Perry told WBUR its lease agreements have a clause requiring Spot not be used in a way that would "physically harm or intimidate people". The clause is not present in the memorandum agreement obtained by ACLU.

"Part of our early evaluation process with customers is making sure that we're on the same page for the usage of the robot," he said. "So upfront, we're very clear with our customers that we don't want the robot being used in a way that can physically harm somebody."

ACLU, for its part, wants lawmakers to regulate how robots like Spot can be employed to ensure they're not misused. ACLU representative Kade Crockford said a terms of service agreement was insufficient.