Online retailer Ocado is testing out a robotic arm to pick and pack orders in its warehouse.

The test is part of a European Union-backed project to design robotic hands that are suitable for handling fragile objects. 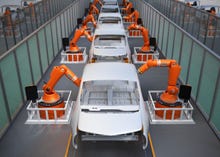 The upmarket online retailer said that one of the main challenges for robots is handling easily damaged and unpredictably shaped objects such as fruit and vegetable.

The Ocado Technology robotics team mounted the RBO Hand 2, developed by the Technische Universität Berlin, on two different robot arms, and tested how it managed to grab artificial fruit.

The hand uses flexible rubber materials and pressurized air for passively adapting grasps, which allows for safe and damage-free picking of objects.

"Initial results showed that the hand is able to successfully grasp a variety of shapes. The results suggested the chance of success increased when environmental constraints are being used effectively to restrict the movement of the object," said Graham Deacon, Ocado's robotics research team leader. Over the coming months the retailer plans to explore more complex scenarios for the robot hand, and said robots like these could be used in its warehouses from 2020.

Ocado is already highly automated, with automated systems picking somewhere around one million items at day at its warehouse, said Matt Soane, general manager at Ocado Technology, although packing orders is still done by humans.

"Ocado's been in the business of automation since we opened in 2002 and we employee in excess of 10,000 people. We wouldn't be providing those jobs if it wasn't for automation and our experience of automation is often actually it assists the people working for us," he said.

"We have examples of where we have automated things and it enables our people working in the warehouse to potentially do more interesting things or get greater fulfillment out of what they are doing. So we don't see automation as something that takes away jobs," he said.

The work forms part of the SoMA Project a research programme funded by the EU.

Join Discussion for: Supermarket tests robot arm for packing your...