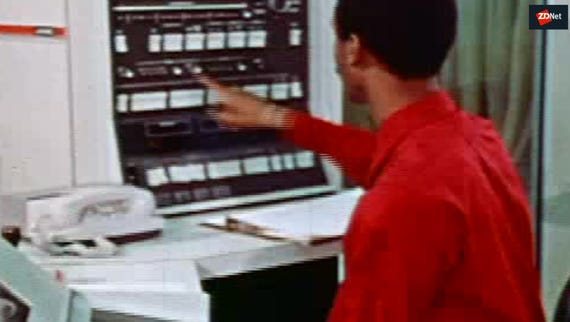 The 1970s tech that changed us
Watch Now

That's where we're going to start our list. In this 50-year retrospective, we're not just looking at technology year by year, we're looking at technologies that had an impact on us, paved the way for the future, and changed us, in ways good and bad.

Looking back is an interesting exercise, because we're able to see an overall pattern of innovation, and look at technologies, products, and events that influenced who we have become, and in doing so, have changed the world.

From tortillas to the Hubble telescope, and from weather satellites to GPS, we all benefit from America's space program and even our military space research.

Read also: HPE, NASA to launch a supercomputer into space

Back in 1968, Apollo 8 was originally designed to perform Lunar Module testing in low Earth orbit, but production failures were found. Instead, given that the Command/Service Module was ready for flight, engineers proposed a bold mission change: Fly a human around the moon.

History was made. Technology transfer from the space program has fueled many inventions and innovations, but it was also the excitement of this human accomplishment that drove many young minds (including that of your author) to enter STEM careers.

1969: Smoke detectors for home use

No doubt, many of you consider the greatest technology accomplishment of 1969 to be the lunar landing by Neil Armstrong and Buzz Aldrin. At it was. But there was another technology, one most of us take for granted, that has saved thousands upon thousands of lives.

In 1969, the Atomic Energy Commission, now the Nuclear Regulatory Commission, granted the first license for manufacturers to sell smoke detectors for home use. You may not realize it, but each smoke detector contains a very small amount of radioactive material, and thus it wasn't until the AEC approved home use that smoke detectors could be used to keep families safe.

According to the National Fire Protection Administration, the risk of dying in a home fire is cut in half in homes with working smoke alarms.

The Pocketronic shares billing with the Sanyo ICC-0081 and the Sharp QT-8B for bringing pocket calculators to students, engineers, and scientists the world over. The innovation then, as it is still today in our portable devices, was the ability to produce low-powered chips and reliable rechargeable batteries in a form-factor that allowed for portability.

The 4004 ran at a tenth of a megahertz, but it was huge in terms of its impact. The 4004 was the first true microprocessor, and like much of modern technology, it didn't begin that way.

Intel (who was just another company back then) was contracted by Japanese calculator maker Busicom to build a chip to reduce the costs of their calculator. Instead of merely developing a chip set specifically for use in one machine, the 4004 turned out to be a very early general purpose programmable chip, capable of much more than mere basic math. And the rest, as they say, is history.

As I'm writing this, my wife is in the other room playing Horizon Zero Dawn on her PlayStation 4. It's a open-world game with amazing graphics and animations, presented in 4K and HDR. It brings an entire world to life with the resolution of a summer blockbuster movie.

Read also: Atari to launch cryptocurrency token for use in casinos

But in 1972, interactive games with vastly more primitive graphics only existed in laboratories, attached to giant computers. That is, until Pong. Pong was the first commercially successful video game, paving the way for an industry that's bigger than movies and music combined.

Pong or Horizon Zero Dawn. It doesn't matter. My wife is a much better gamer than I'll ever be.

1973 was the year the Xerox Alto, the first cell phone call, TCP, Ethernet, and fiber optics were created. Together, all of those technologies have, in combination, informed the world we're in today. That makes 1973 a tough choice.

I'd award the year to the Alto, because it demonstrated the graphical UI we all know so well. But what about cell phones? Smartphones have beaten out the PC and Mac for digital dominance, going well beyond the Alto's UI innovations. TCP, Ethernet, and fiber optics are what make the Internet possible, and without the Internet, where would we be?

If I were writing this ten years ago, my answer would be different. But today, the mobile smartphone is the dominant technology, bar none. And it all started in 1973.

Although barcodes were patented back in 1952, the same year that Alan Turing defined his Turing test, commercial use didn't take place until 1974. That's because laser technology necessary to do the barcode scanning didn't exist until the 1970s.

The big day was June 26, 1974. It was about 8am on a drizzly, foggy Wednesday in Troy, Ohio when Marsh supermarket cashier Sharon Buchanan took a pack of Wrigley's Juicy Fruit Gum from Clyde Dawson and ran it through her newly installed barcode scanner. For the first time anywhere, a barcode had been scanned to determine a product price, and retailing and supply chains the world over would never be the same.

Runners up: The Mark-8 microcomputer kit and the Rubik's Cube.

In some ways, the Altair 8800 was just another kit offered to geeky hobbyists. But it changed the world. The Altair 8800 was promoted on the cover of Popular Electronics and became the first commercially successful microprocessor-based computer.

Read: From paper tape to a patched-together Altair 8800, the story of my first computer

If that were all, though, we might give the award to Betamax. After all, home video is a big business today. But the Altair didn't just usher in the personal computer business, it gave birth to Microsoft. It was Bill Gates and Paul Allen who wrote the original BASIC interpreter for the 8800, and then went off to create Microsoft. You know that story. We all know that story. And the Altair 8800 was the first chapter.

For 1976, we're giving the award to a company, not a technology. It could be argued that a business is really code, its DNA driven by the personalities, values, and innovative insights of its founders.

That's certainly the case with Apple, which was founded by the late Steve Jobs, Steve Wozniak, and a rather unfortunate Ronald Wayne, who sold his founder's equity stake in the world's most valuable company for $800.

Runner up: The Apple I, which didn't change the world nearly as much as its company and founders.

Now, it's time for an Apple computer to make our list. The Apple II not only changed the face of personal computing, it ushered in other key transformations, like Visicalc, the first commercial spreadsheet program.

CNET: Apple's first 40 years: An oral history from inside the loop

While computerized mailing lists had existed for years on the Arpanet, it wasn't until 1978 that the precursor of our modern day forums and BBSs was created. It was during the Great Blizzard of 1978 that Ward Christensen and Randy Suess were stuck at home. Christensen had already created the canonical MODEM protocol for file transfer (you may know it today as XMODEM).

Bored, with nothing better to do, Christensen and Suess created CBBS, a dial-in forum system that became the first BBS. There was only one phone line, so each participant had to wait until a previous user hung up to gain access.

The importance of BBSs can both be mocked and celebrated. Without BBSs, we probably wouldn't have as many trolls as we do online. But BBSs were also the first social networks, a way for consumers and interested parties to gather together, magnify their influence, and share information.

It's hard to believe now, but the idea of private, personal music didn't exist before 1979. Either you played albums on your home stereo or blared the music from cassette tapes to the entire neighborhood on your boombox.

But in 1979, when Sony introduced the Walkman, you could finally listen to your choice of music, in private. This reduced family bickering, made it possible for workers to listen to their own music on the job (when appropriate, of course), and gave a lift to the entire music business.

Runner up: McDonald's Happy Meal, because -- behind pizza and Chinese food -- McDonald's fuels American innovation where it counts.

Join Discussion for: Technology that changed us: The 1970s, from...