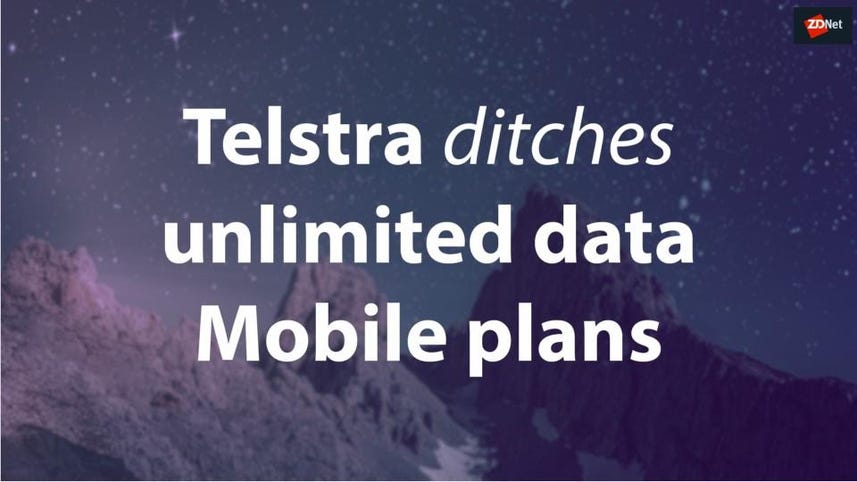 Telstra has released its long-heralded new data plans as part of its Telstra2022 strategy.

Once users exceed their data quota, speeds will be slowed to 1.5Mbps. Users will not be able to use data packs like they have in the past, as users who need extra bandwidth will need to jump up to the higher tier and will be unable to purchase extra data. Telstra said it sees very few people using more than 150GB a month on its network.

"With no excess data charging, if you exceed your included data allowance, your data speeds are capped at 1.5Mbps until the end of your bill cycle (not suitable for HD video or high speed applications, and means that some web pages, video/social media content and some large files may take longer to load) and slowed further during busy periods," Telstra's new summary states.

Telstra is continuing to offer quota-free streaming of certain sports and Apple Music, and will allow customers to switch plans once per month.

The biggest changes are the ditching of its AU$200 unlimited data plan, and the switch to month-to-month commitments for voice, text, and data charges. Purchasing a phone is now separated from the plan, which Telstra is using to claim that it no longer has "lock-in" contracts, but the telco is still selling devices that are paid off over a period of up to three years.

For instance, a Samsung Galaxy S10 5G is set to cost AU$93 a month, for the phone only, at a minimum total cost of AU$2232 over 24 or 36 months. Should a user move away from the telco, they will still need to pay out any remaining commitment on a purchased device.

The telco said it has reduced its overall number of mainstream plans, covering fixed and mobile access, from 1800 to approximately 20.

Earlier this morning the ABC reported that the Australian Competition and Consumer Commission is investigating whether Telstra's sales practices violated consumer law.

The national broadcaster reported instances of Indigenous Australians being targeted for large plans, which when coupled with excess data fees, are hitting some of Australia's poorest people with bills reaching almost AU$8,000.

Victoria to trial automated vehicles in partnership with Telstra and Lexus

On-road testing will get underway on metropolitan and regional roads soon.

All production vehicles are hooked up to a private 4G network for Newcrest Mining.

Telstra to allow payphones to take calls alongside price drops

Australians will soon be able to do an American movie stereotype and call a payphone.

Telstra formally warned after deploying base station without community contact

Telco also failed to respond to complaints after the mobile station had already been deployed.

Pricing to start from AU$70 a month for 10GB of base data.